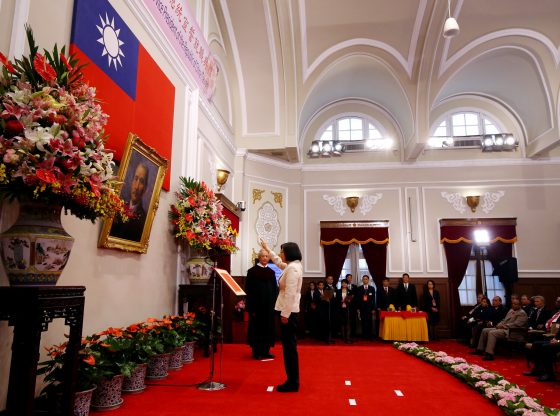 In Spring 2019, the political future did not look very rosy for Taiwan’s President Tsai Ing-wen. She had to fight a fierce internal presidential primary battle against challenger Lai Ching-te, while her likely Kuomintang (KMT) opponent, Kaohsiung mayor Han Kuo-yu, was riding high on his “blue wave” popularity.

But the tides quickly turned: Tsai conducted an active outreach campaign and firmed up her language vis-à-vis China, thus regaining support among the “deeper greens” who had felt that she did not go far and fast enough in her reforms. In early-June she won the Democratic Progressive Party’s (DPP) primary against Lai and on 13 June was formally declared the DPP’s presidential candidate.

Han did win the July 2019 KMT primary race against Foxconn luminary Terry Gou, former Taipei County magistrate Eric Chu – who lost against Tsai in the 2016 elections – and several other minor candidates. But Han’s erratic behaviour, raunchy populist approach, and a series of gaffes gradually led to a decline in his popularity ratings.

Then came an unforeseen event that significantly affected the political landscape in Taiwan. On 9 June 2019 in Hong Kong an estimated one million people marched to the government headquarters to protests against Chief Executive Carrie Lam’s proposed extradition bill. It was largely a peaceful rally, though some small skirmishes broke out.

Then, on 12 June, a fresh demonstration took place at which police fired tear gas and rubber bullets. Three days later Lam issued a dramatic reversal, saying she would indefinitely delay the extradition bill. However, the stand-off developed into an increasingly violent cat-and-mouse game between police and protesters that has now lasted more than six months.

The events in Hong Kong, of course, featured prominently in Taiwan’s media and reinforced the already prevalent sense that the “One Country, Two Systems” model was increasingly unacceptable to Taiwan. In opinion polls, the percentage rejecting the model rose from around 80% in January to more than 90% in September 2019. Even normally ardently pro-China KMT leaders emphasised they were against the model.

Tsai Ing-wen’s poll ratings were already climbing back up after all-time lows before really spiking in mid-June, at the onset of the Hong Kong rallies. In August, when the running battles were raging between demonstrators and police, her ratings climbed further to their present levels.

As Summer was winding down and the deadline for presidential candidates to formally register with the Central Election Commission approached, speculations abounded as to who would register as an independent candidate and who would associate with any of the smaller parties to run as their candidate. In the end, Foxconn’s Terry Gou pulled out, while former vice-President Annette Lu decided to run. However, by the 2 November 2019 deadline, Lu was unable to collect the required number of signatures and had to bow out.

Another presidential wannabe was Taipei mayor Ko Wen-je, an independent who in August 2019 founded his own party, the Taiwan People’s Party, with the apparent intent to run as its presidential candidate. In the end he also bowed out but is reportedly still eager to play a role at the national level by securing a number of seats in the legislature.

To everyone’s surprise, in mid-November, there was yet another presidential candidate: James Soong of the People’s First Party (PFP). This is his fifth attempt and no-one expects him to win the presidency, but Soong has always relished the role of power broker and if his PFP wins anywhere between three and five seats in the Legislative Yuan, while neither the DPP nor KMT gain a majority, he can throw his weight on the scale.

The election is currently a three-way race. Based on this excellent aggregation of presidential polls by Nathan Batto of the Frozen Garlic blog, President Tsai is ahead with around 46%, Mayor Han Kuo-yu lagging behind with around 26%, and James Soong a distant third with a little less than 8%.

However, these numbers show around 20% of voters as undecided. If these undecideds are proportionally allocated to the candidates, then the prognosis for the outcome would be as follows: President Tsai 58%, Mayor Han 32.3% and James Soong 9.7%. Interestingly, these numbers are almost precisely the same as in January 2016, when President Tsai gained a landslide victory over the KMT’s Eric Chu and James Soong came in as a distant third. Barring any major developments, this picture should hold on 11 January 2020.

However, a different picture emerges from an analysis of the races for the Legislative Yuan’s 113 seats. Out of this total, 73 are “winner-take-all” district seats, 34 are “at-large” seats allocated by percentage of total votes received per-party, and six seats allocated to Aboriginal candidates elected by indigenous voters.

57 seats constitute a majority. Thus, if the DPP drops below 57, President Tsai will have a hard time governing and will have to work with other parties. If the DPP stays above the 57 mark, Tsai will be able to continue her reforms and policies.

Based on the KMT’s November 2018 municipal election success, the KMT is expected to recover somewhat from its 2016 legislative election defeat and an all-time low of 35 seats. However, in addition to the negative effect of Han Kuo-yu’s antics, the KMT suffered from a major controversy over its candidate list for the 34 “at-large” Legislative Yuan seats. To the surprise of many – even within the KMT – the party nominated several ardently pro-China unificationists high on the list, including extremist former KMT legislator Chiu Yi and retired lieutenant general Wu Sz-huai. Wu has often visited China, hobnobbing with Chinese political and military leaders. After strong protests from within the KMT, Chiu Yi bowed out of the race, but Wu is still high on the list.

If neither DPP nor KMT achieves a majority, the smaller parties will play an important role. According to current projections, the New Power Party (NPP), James Soong’s People First Party (PFP), and Ko Wen-je’s Taiwan People’s Party (TPP), are expected to have sufficient popular support to gain at least 5% of the vote – the threshold for at-large seats. While the NPP is generally more closely aligned with DPP, internal political turmoil may affect its electoral performance.

The PFP will in all likelihood retain its present three seats. Ko’s TPP has teamed up with Foxconn’s Terry Gou and has appointed two of Gou’s associates high on the list for at-large seats. The TPP may get 10-12% of the party vote, which would translate into four seats.

While the DPP’s Tsai has a margin of some 25% over her KMT challenger Han, the picture is less rosy in the Legislative Yuan. Here the DPP might just barely hang on to its majority, depending on the smaller parties’ performances. If the DPP loses its legislature majority, Taiwan will likely have a more turbulent political landscape and increased cross-Strait tensions, as Beijing will be only too happy to exploit Taiwan’s political divisions.

Tsai and her team will thus need to display a 2020 vision and redouble their efforts to support the legislative candidates in order to continue the DPP’s majority for the next four years. When that happens, she will be able to further strengthen the domestic reforms already initiated, accelerate the transition to renewable energy, and enhance Taiwan’s freedom, democracy, sovereignty and place in the world in the face of an increasingly aggressive and belligerent China.

Gerrit van der Wees is a former Dutch diplomat; from 1980 through 2016 he also served as editor of Taiwan Communiqué. Since 2012 he has taught History of Taiwan at George Mason University.

Why the UK Cannot ‘Go It Alone’ with China
China’s interference in Taiwan’s elections: Responses from Taiwan and the US