Captive elephant tourism in Asia: Hope for Asian elephants or a threat? 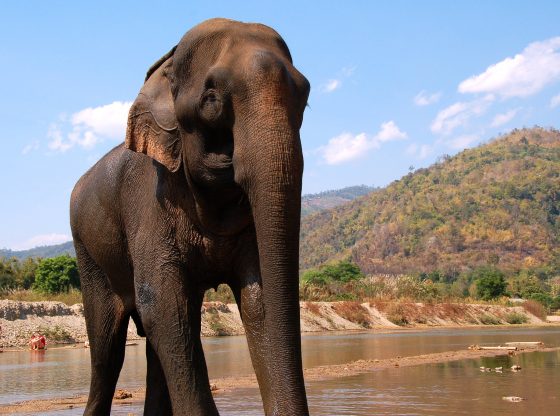 Malee, a 25-year-old female Asian elephant, is using her trunk to pull some grass into her mouth to then thoroughly chew on it. She is standing calmly on a patch of dried soil in the half shade of a tree somewhere on Phuket in Thailand. It’s her break after giving several rides to tourists this morning. Her mahout (keeper) has just thrown some grass in front of her ‘to keep her happy’, as he explains to bystanders.

At first glance it’s an idyllic picture and it serves as a backdrop to many selfies by the tourists who are leaving to make room for the next group. Only on second or third glance do you notice that Malee’s mahout has put a chain around her front leg, he is carrying a pointed metal hook in his belt, and Malee is faintly rocking her whole body sideways while eating the grass. The other four elephants standing nearby are in exactly the same situation; none of them are related to Malee.

So is Malee ‘happy’? Does riding elephants like Malee help to protect Asian elephants, as is often claimed? Seemingly simple questions, but ones that lead to many answers, depending on who is asking and who is being asked.

Can this vicious cycle of increasing tourism, more captive elephants and worse animal welfare be broken without causing a negative impact for either elephants or people?

A multitude of factors has led to this imbalance, two of them being the massively increasing human population in Asia that is encroaching into natural habitats, and the thousands of years in Asian history of keeping captive elephants for ceremonial, warfare or economic purposes. It is the last of these – economic reward – that has been the major driver for keeping captive elephants over the past decades, particularly since the onset of mass tourism.

Over 3,000 elephants are kept in captivity for tourism across South and South East Asia according to the 2017 research report ‘Taken for a Ride’ which I authored for World Animal Protection. This was based on surveying hundreds of elephant camps across Asia. The majority of tourism elephants – over 2,000 – were in Thailand, which is by far the most popular tourist destination in the region.

The report outlines that approximately 80% of captive elephants in Thailand are kept in severely inadequate conditions: chaining, isolation from family members, punishment when not complying, traumatic training in their youth – all these factors are unfortunately deemed necessary to manage captive elephants safely for tourism. However, just because something is deemed necessary, does that make it any less of a welfare problem that needs to be addressed? Or is it even seen as a problem at all?

In response to the above report, a paper was published by Chiang Mai University (located in one of the hotspots of elephant tourism) in collaboration with the Smithsonian Conservation Biology Institute in the US. This paper argued that it is debatable whether one can simply assume that elephant shows, elephant rides, the metal hooks used by mahouts to control elephants or chain restraints always have a negative impact on elephants’ welfare.

Indeed, evaluating the welfare of wild animals is a complicated matter and, grossly simplified, often based on comparing the conditions of captivity and the animals’ physiology and behaviour to that of animals in their natural habitats in the wild – habitats that elephants have perfectly evolved to live in over thousands of years. By that standard, chain restraints, show performances and controlling tools such as metal hooks are at odds with good welfare.

The common rationale given for this of course is that elephant owners need an income in order to provide for their elephants, and if tourists are to be allowed to interact closely with elephants during rides or washing activities, then such methods are needed to control the elephants.

Most of today’s captive elephants have not ended up in this situation by chance. In the wake of a 1989 regulation which strictly limited the use of Thailand’s elephants for timber logging, elephant tourism at first promised an alternative for elephant owners to continue to make an income. Fast forward to 2019 though, and fewer than 50% of the captive elephants in Thailand belong to this generation of logging elephants. Today, the majority have been captured or – especially during the last decade in Thailand – bred in captivity specifically for the tourist industry. Trying to justify the need for the above elephant management methods to use on the very elephants that have been expressly bred for tourism is not without irony.

Despite its status as an endangered wild animal, a captive elephant is legally considered livestock in Thailand and can be sold for over USD50,000 – a testament to their economic value and very much in contrast to the Convention on International Trade in Endangered Species of Wild Fauna and Flora (CITES), whose regulations prohibit  commercial trade in elephants internationally.

With tourist numbers in Thailand more than doubling over the last 10 years there is enough incentive to turn a profit from the situation. Unsurprisingly, this incentive has led to 30% more elephants in captivity today than during the time of the logging ban. Yet the more captive elephants there are, the harder it becomes to take care of them as their numbers compete for resources such as food and land as well as skilled labour in the shape of mahouts.

Does elephant tourism at least benefit the small group of elephant mahouts? Every elephant at a tourism camp is managed by a mahout, and employed mahouts commonly earn salaries around the level of the minimum wage along with tips. For this they perform an incredibly demanding and dangerous job. The risk of injury – sometimes fatal – is incredibly high, particularly when managing elephant bulls, of which there are many more today given that captive breeding leads to a more equal gender balance. Consequently, surveys have shown that only a small minority of mahouts would wish their children to become mahouts themselves: it seems that the mahouts are trapped in elephant tourism just as much as the elephants are.

So how can this vicious cycle of increasing tourism, more captive elephants and worse animal welfare be broken without causing a negative impact for either elephants or people? There is no silver bullet here, but after more than ten years spent researching and working on this issue, a promising solution has taken shape which comprises three interdependent aspects:

We are optimistic that we are now seeing the beginning of the end of the plight of captive elephants, with an increasing number of elephant-friendly observation-only activities being made available to tourists. Over 250 travel brands have also pledged to avoid venues that offer elephant entertainment such as rides and shows in favour of more ethical alternatives. Nonetheless, as long as the numbers of captive elephants continue to rise, the journey is not over. But we have a pathway to improve the future of the elephants; all we need now is for people to follow it.

Dr Jan Schmidt-Burbach is an experienced wildlife veterinarian who works as the Head of Wildlife and Animal Welfare Research for World Animal Protection. He conducted his PhD on captive Asian elephants and later specialised in animal welfare and wildlife trade concerns. For over ten years he based in Asia, mostly in Thailand, where he has documented the changes in the wildlife tourism industry in several reports and papers. This article is based on ‘Taken for a ride: the conditions for elephants used in tourism in Asia’ (2017) by Jan Schmidt-Burbach.

China’s interference in Taiwan’s elections: Responses from Taiwan and the US
Will small parties change Taiwan’s political landscape in 2020?