China’s interference in Taiwan’s elections: Responses from Taiwan and the US

Home /China, Elections, Taiwan, Taiwan-US-China/China’s interference in Taiwan’s elections: Responses from Taiwan and the US 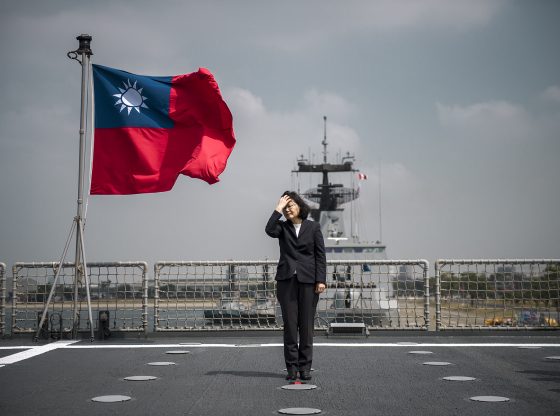 In January 2020 Taiwan will elect its president for the next four years. Incumbent president Tsai Ing-wen warned in an interview that “China’s attempt to meddle in this upcoming presidential election…is very obvious. We can see the shadow of Chinese meddling in every important election of Taiwan.” Although China denied the allegation, respectable research and reports provide evidence of how Beijing sways Taiwan’s elections and political processes. Since Taiwan’s 2018 ‘nine-in-one’ local elections, there has been much productive analysis of Chinese interference (to which I contributed my own assessment). One aspect, however, has not been thoroughly covered: how can Taiwan and the US cooperate to safeguard the coming presidential election against China’s intervention? Many Taiwanese have not fully recognised that this election is at the centre of a clash between two forces – China vows to reset the existing liberal international order, while the US endeavours to strengthen it.

China’s most visible and longest-held measure for influencing Taiwan’s elections is military intimidation. Since Tsai assumed office, China has ramped up military coercion considerably by conducting military exercises in Taiwan’s vicinity, and periodically dispatching its navy and air force to circumnavigate the island. These military manoeuvres attempt to undermine faith in the Tsai government and sends an aggressive political message that the Taiwan Strait is China’s territorial water.

The United States’ most concrete countermeasure is including Taiwan in its Indo-Pacific Strategy. The Indo-Pacific Strategy Report says, “The objective of our defence engagement with Taiwan is to ensure that Taiwan remains secure, confident, free from coercion, and able to peacefully and productively engage the mainland on its own terms.” After officially incorporating Taiwan into this strategy in 2019, the US significantly increased its freedom of navigation operations in the strait, and encouraged like-minded states such as Canada and France to follow suit. The frequency of US and its allies’ warships passing through the strait jumped from just three times in 2018 to an average of once a month in 2019. This countermeasure is a political response to China, signalling that the Taiwan Strait is international waters, which every state can freely use.

China’s second measure for intervening in Taiwanese elections is through media. China has greatly expanded its global media reach since 2008 through “the Grand Propaganda Plan.” The plan aims to boost China’s voice in the international community, where “the say” is mostly monopolised by Western media. Part of this plan is buying media outlets in Taiwan, enabling Beijing to influence the Taiwanese public by controlling what is broadcast. One study of the 2018 election conducted by the National Communication Commission of Taiwan paints a worrying picture of Beijing’s control over Taiwan’s media. During the election, certain cable television channels spared no effort covering stories about pro-unification politician Han Kuo-Yu, Beijing’s preferred candidate. This heavily skewed coverage of Han reflects the fact that China’s extensive influence on media outlets is becoming a national security threat to Taiwan.

To deal with this new type of threat, the ruling Democratic Progressive Party (DPP) accelerated legal protection against foreign infiltration. The Legislative Yuan has amended four relevant acts and is drafting a foreign agent registration act, the Anti-Infiltration Law. Though official help from the US in legal protections is nebulous, there has been assistance through track-two channels. Zuo Rong-tai, the Chairman of the DPP, along with some key party members, visited Washington DC in 2019 and met several think tank researchers and retired State Department officials such as Richard Bush, Abraham Denmark, and David Keegan. One key purpose of the meetings was to discuss the potential applicability of the US Foreign Agents Registration Act, which requires individuals doing political or advocacy work on behalf of foreign entities to disclose and register necessary information, to Taiwan’s draft law. The Legislative Yuan expects to pass the law before the presidential election.

The third and newest development is China’s weaponization of its cyber capability as a tool for intervening in other states’ domestic affairs. China realised the importance of cyberwarfare as early as 2000, and Xi Jinping greatly fortified China’s capability in this domain through military reforms and establishing the Central Cyberspace Affairs Commission. China is currently outpacing the US: Ian Easton, Senior Director of Project 2049 said, “this is a fight that we are losing.” There is no better example of China’s cyberwarfare capability than the balloting result of Taiwan’s most recent election. Numerous studies partially attribute Han’s astonishing victory to Beijing spreading misinformation and disinformation on Facebook and private groups on Line. Chen Chi-mai, who heads the Department of Cyber Security at the Executive Yuan, indicated, “Taiwan suffers on average thirty million online attacks per month. Most of them are from China.”

Both the US and Taiwan view Chinese cyber-attacks as the most serious threat of Chinese intervention. US officials agree that Taiwan is now the main testing ground for the Chinese cyber army, and the possibility that China could use a similar strategy in this upcoming presidential election cannot be ruled out. To deal with this threat, the US has deepened its cooperation with Taiwan since the last election. US Assistant Secretary of Defense Randall Schriver stated straightforwardly, “As required, we will make a direct contribution to Taiwan’s capability and capacity to deal with this (cyber threat from China) as the election approaches.” Over five days in November, the US and Taiwan co-hosted an unprecedented large-scale cyber exercise, a Taiwanese version of the US biennial Cyber Storm exercise, along with another 15 states. Cyber teams from the 15 states tried to break into Taiwan’s online defense of critical national facilities to help Taiwan identify and lessen its cyber-vulnerabilities to China.

The ongoing US-China rivalry is manifest in Taiwan’s upcoming presidential election. As the US and China gradually slide into a Thucydides trap, states in the middle are unavoidably drawn into the rivalry. The result of the coming election will be a critical element accelerating or decelerating the dynamic of the trap. In other words, the election is no longer just about who (the DPP or the Kuomintang) will rule the island for the next four years, but more about who (the US or China) will determine the international order of East Asia and beyond for the next decade.

Yu-Hua Chen is a Lecturer in the School of Politics and International Relations at the Australian National University, with particular expertise in Chinese foreign and security policy, international relations theories, and the history-security nexus in the Asia-Pacific region. He tweets at @YuHuaNealChen