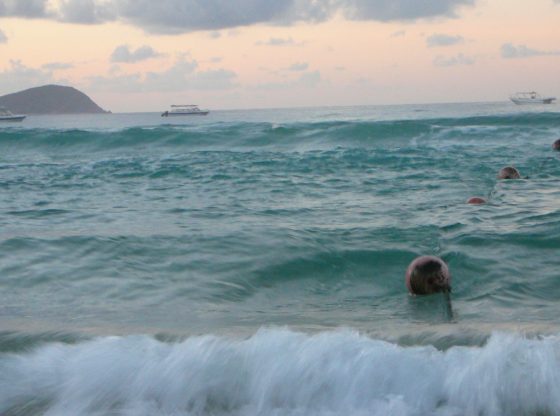 Written by Jeremy A. Murray.

The island of Hainan is both something more and something less than ‘China’s Hawai’i’, as many observers have rushed to dub it. The largest island administered by Beijing, Hainan lies off the southern tip of mainland China in the geopolitical cauldron of the South China Sea.

Like Hawai’i, Hainan’s natural beauty attracts tourists, and also like Hawai’i, its location makes it an important military hub. But Hainan’s place in the mainland Chinese imagination and popular culture reflects a sometimes tense relationship between mainlanders and Hainanese, and these tensions go back several centuries.

In recent decades, with the growth of China’s middle class, Hainan has become a popular place for tourists to spend their winter holidays. And with a far-reaching global advertising campaign and the juggernaut of Hainan Airlines, international tourists are also increasingly heading to Hainan’s sunny, palm-lined beaches. Government efforts to make the island a world-class tourist destination have included tax exemptions on luxury goods purchased in Hainan and a relaxation of visa regulations for some foreigners.

In Chinese popular culture, Hainan is known not only as a tropical paradise, but also as the setting of the Cultural Revolution model drama The Red Detachment of Women

The island is one of the few destinations in China where some foreign visitors are able to bypass many of the visa requirements and simply land on the island and process their travel documents at the airport. Hainan is also the destination for numerous international sports and beauty competitions, as well as the annual Bo’ao Forum for Asia, which hosts world leaders to discuss regional and global policy every spring.

There was some speculation in 2018 about the possible impending arrival of legal gambling and prostitution to the island, but the authorities dismissed this as confusion about some legislative manoeuvring. Whether this was a trial balloon or a genuine misunderstanding, it is noteworthy that observers found it credible that Hainan could soon be a new place for legal gambling in China outside of Macau, as well as legalised prostitution. Lying at its extreme southern margins, Hainan does indeed enjoy a special place in the Chinese imagination.

In Chinese popular culture, Hainan is known not only as a tropical paradise, but also as the setting of the Cultural Revolution model drama, The Red Detachment of Women, which has been made into a film, an opera and, most notably, a ballet. The drama – one of only a few that were permitted to be screened or performed during the Cultural Revolution (1966–1976) – tells the story of a young woman enslaved by a wicked landlord. She escapes her captors, finds a Communist guerrilla base in the jungle, and returns with them to exact her revenge. The guerrillas teach her the importance of discipline and revolutionary virtues, and her courage and passion are sublimated into Maoist slogans. While this sounds like a lot of Mao-era kitsch, it continues to be an enormously popular ballet, both in China and around the world.

The depiction of the hero of The Red Detachment represents the wild frontiers of traditional Chinese civilisation, and thus she is fierce and very nearly ungovernable. This drama is loosely based on a real military unit of Hainanese women in the early 1930s who fought for the fledgling Communist guerrilla movement on the island before being dispersed.

Although the unit was real, the creators of the drama took many liberties that help us understand Hainan in the Chinese popular consciousness. Most notably, they inserted a man as the unit’s political commissar or Party representative (dang daibiao), even though historically the actual political commissars of the unit were both Hainanese women. And in a curious editorial decision, this fictional man is made to be a mainlander who has come to Hainan to help lead the islanders.

There are some echoes here of the colonial approach Americans have taken to Hawai’i, including the depiction of the Hainanese as exotic and wild women. Perhaps in part due to this gendered perception, the sex trade in Hainan, including sex tourism, has expanded rapidly since the beginning of the reform era, and Dr Yeon Jung Yu has explored the conditions of sex workers in Hainan in her recent analysis for The Asia Dialogue.

However, all these aspects of Hainan are principally about the island as it is perceived in the mainland popular imagination or by international tourists. While these perceptions of primitive wildness can have an impact on Hainan and the Hainanese, there is an untold and important other half to this story, which is the ways in which Hainan islanders see mainlanders and other outsiders.

Living on Hainan while I conducted research into the island’s revolutionary history, I spoke with many Hainanese who were quick to point out the economic backwardness of their island province’s economy. While Hainan boasts a growing number of tourist amenities, the persistent view of the island as a backwater and a drag on the churning Chinese economy is still prevalent. Some mainlanders are dismissive about the island’s relevance beyond its importance to tourism and as a South China Sea watchtower, while a sore point for many Hainanese is their island’s perennial neglect by mainland administrators. Mainland officials are posted to Hainan on a temporary basis, and some Hainanese speak of them as opportunistic carpetbaggers with no roots and no concern for the welfare of the islanders.

This tension is reminiscent of Hainan’s earliest relationship with the mainland, when the island was not a desirable and exotic destination but instead a lethal dumping ground for banished officials. In previous eras, banishment to Hainan was effectively a delayed death sentence for government officials who were sent there with the expectation that they would soon succumb to tropical diseases or hostile islanders.

Some exceptional figures, such as the great poet and statesman Su Shi (Su Dongpo, 1037–1101), wrote affectionately of the island and the people he encountered while in exile, as well as the islanders’ perceived shared humanity rather than provincial hierarchy. For their part, the Hainanese developed an off-centre and unruly form of heroism, adopting as their own these discarded titans of the Chinese pantheon, who are still revered at shrines around the island today.

Jeremy A. Murray is Associate Professor of History at California State University, San Bernardino. His most recent book is China Tripping: Encountering the Everyday in the People’s Republic (Rowman and Littlefield, 2019), with Perry Link and Paul Pickowicz.