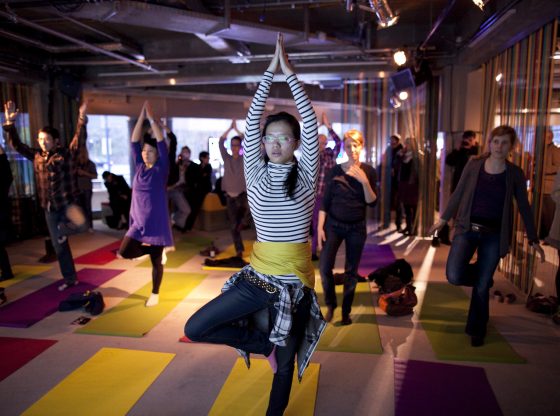 Written by Katherine Jakovich and Jeremy A. Murray.

The relationship between the Chinese and Indian cultures goes back many centuries to the trade routes now called the Silk Roads. More crucially than silk, perhaps, ideas like Buddhist teachings arrived from India and had an enormous impact on Chinese philosophy and society.

Yoga is still a relatively recent import into China, but it seems one that is likely to make significant inroads

Today, yoga has emerged as a new Indian cultural export that has definitively arrived in China. Yoga was first popularised in China through the television programmes of Wai Lana (Zhang Huilan) in the 1980s on China Central Television (CCTV). It took hold in Hong Kong in these early years, but in recent decades, and especially in the past five years, yoga has rapidly grown in popularity, especially among China’s emerging middle class.

As with Buddhism nearly two thousand years ago, yoga is entering into a cultural world that already has its own counterparts to compete against for popularity. In China, several physical and mental disciplines already exist that may seem to overlap with yoga, including various martial arts and, most notably, qigong and tai chi.

Yoga and tai chi have both come to represent important aspects of Indian and Chinese culture, respectively. As cultural icons representing the embodiment of ancient virtues, the two disciplines have been used in everything from Olympic ceremonies to international commemorations to credit card advertisements, although it is a matter of some controversy to what extent modern-day practices have in fact been inherited from ancient tradition and to what extent they have been interpreted or invented more recently.

Nonetheless, these traditions have become a focus of state-sponsored pride in both countries. The iconoclasm and culture-smashing rhetoric and actions of the Chinese May Fourth Movement (1919) and the Cultural Revolution (1966–1976) are now a distant memory. Chinese cultural traditions are surging back with greater confidence, with one of Beijing’s main soft-power initiatives being named the Confucius Institute – barely fifty years after the great sage’s family graveyard and shrine were smashed by Maoist Red Guards.

This dramatic turn from cultural scapegoat to national hero coincides with an increasing mood of cultural and nationalist confidence in China, particularly since the ascent of Party General Secretary and President Xi Jinping in 2012. An increase in cultural confidence is also apparent in India, although in a different way. With the election of Narendra Modi as Prime Minister, Hindu nationalism seems to be on the rise in India. In the view of some critics, Modi came to power in 2014 under a cloud of concern about whether he would offer equal treatment to Hindus, Muslims and Sikhs.

Less than a year into his first term in office Modi saw the United Nations officially recognise June 21 as the International Day of Yoga. As Modi has noted, state support of yoga has served to expand its influence and preserve the tradition. This symbiotic relationship between yoga and the state also sees yoga being used by Modi and the Indian state as an olive branch and gesture of cultural goodwill in ceremonies that celebrate Sino-Indian cooperation.

Irrespective of state relations, yoga still belongs to the people. Susan (Sixue) Jia has written about the various motivations for yoga practitioners in China in recent years in her study of the subject. She finds that they seek a number of outcomes from yoga, including physical and psychological health, beauty, and social connections. While these are all valid benefits to be obtained from yoga practice, Jia refers to yoga practitioners as ‘yoga consumers’.

Yoga in China seems to have acquired some of the global cachet that makes it an expensive activity around the world. In the cultures of consumption that exist in both the US and China, the daily or monthly fees, along with the designer clothing, bags and water bottles, are all part of the yoga experience as it has been redefined.

Many observers have long been concerned about the commercialisation of yoga around the world, and China is no exception. With the focus on the more physical aspects of yoga, it is possible that the practice is thus kept safe from government attention. The spiritual element of yoga could potentially raise eyebrows in Beijing. Yoga in China seems to be safe in the realm of relieving stress, cultivating beauty and fitness, and building community.

Cultural exchanges between India and China along what we now call the Silk Roads (so named by a nineteenth-century German geographer) go back many centuries, and they have seen periods of blossoming, neglect and hostility. Today, Beijing aims to establish a ‘New Silk Road’, a massive infrastructure development initiative which is also referred to as the Belt and Road Initiative (BRI) or the One Belt One Road (OBOR, Yi dai yi lu, 一带一路).

As with Sino-Indian relations in previous eras, this one is fraught with tensions, but also great potential. Yoga is one avenue that has been used by both New Delhi and Beijing to represent symbolic cooperation and even harmony between the two states and their respective cultures.

In comparison with Buddhism, yoga is still a relatively recent import into China, but it seems one that is likely to make significant inroads. Yoga appeals specifically to practitioners seeking relief from their stressful work environment, and it has taken root in the booming economy of China.

Katherine Jakovich is a yoga educator and author. Jeremy A. Murray is Associate Professor of History at California State University, San Bernardino. He is co-editor of the book Pop Culture and Asia and Oceania (2016). Both recently co-authored a chapter on Oceania in the book Women and Violence.