The confused and uneven response to Chinese party-state influence: A symptom of corporate influence and capitalisation – Part Two: Practice 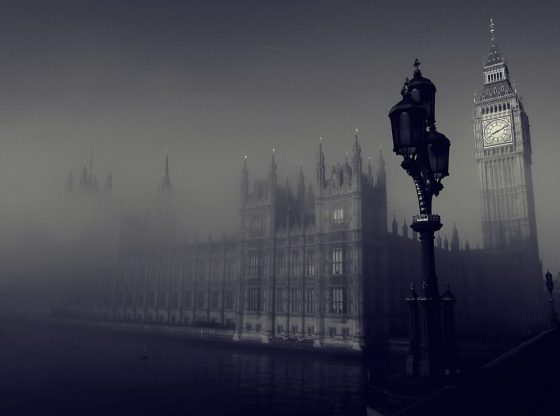 This is part two of a two-part article. Part one can be reached here.

In part one of this two-part analysis, I suggested that the troubled western response to Chinese party-state influence is to a significant degree, a consequence of capitalisation and corporate influence inside government. Here, I depart from theory, employing an investigative research approach to examine what this means in practice. I consider the case of Chinese party-state involvement in the construction of Hinkley Point C nuclear power station in the UK. The British government’s decision to proceed with the project, despite the warnings of security experts and allies, reveals the ascendency of financial considerations over traditionally more statist concerns such as national security.

Part one of this analysis touched upon the divide within the British government over how to engage with the People’s Republic of China (PRC). A victory for the treasury over security specialists allowed the British government to sign an agreement between parties that meant the PRC would part-fund Hinkley as the junior partner with French energy group EDF as the senior partner. But this agreement contained a clause that the PRC could go on to build a nuclear power station using its own technology at Bradwell, taking on operational leadership. The then chancellor George Osborne’s assertion during a visit to Beijing made this clear. He explained that PRC involvement in Hinkley “opens the door for majority Chinese ownership of a subsequently nuclear project in Bradwell”. This decision left the UK’s regional and security allies aghast, with many wondering how such a decision could have been reached. As with the other case studies I investigate in my PhD thesis, excavation of the network that enabled the deal to go through reveals a large number of commercial actors with leverage over the process. These actors stood to benefit from the deal’s successful completion. In this light and according to these actors, the PRC security aspect is simply an additional factor to be managed in order to secure greater shareholder value. 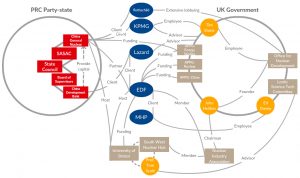 Figure One: A simplified version of the interface of British-Chinese engagement surrounding the Hinkley Point C nuclear power station project. It is framed and to some extent dominated by commercial interests. Image created by author – please do not reproduce without permission.

The Hinkley nuclear deal itself faced a number of very significant obstacles before it came to pass. One of the original architects of the nuclear industry renaissance in the UK was then MP, John Hutton. He had a hand in the creation of the Office for Nuclear Development (OND) inside the government’s Department of Energy and Climate Change. The OND was later criticised for operating within government as a “promoter of nuclear power”, failing in its duty to provide impartial advice. Hutton would go on to head the Nuclear industry trade body, the Nuclear Industry Association (NIA). Hutton’s OND hired Tim Stone as its “expert chair”. Stone was a strong advocate of nuclear energy in government and worked for the UK government at the same time as working for KPMG, a group that received £4,363767 from the UK government for its apparently impartial advice on the Hinkley deal. As it transpires, KPMG had been hired by China General Nuclear (CGN), the Chinese party-state firm that made up the Chinese side of the Sino-French bid to construct Hinkley. This apparent conflict of interest did not impede Stone’s career path as he would go on to succeed Hutton as head of the nuclear trade body, the NIA.

The aforementioned OND inside the British government was heavily lobbied by the leading financial group, Rothschild. Like KPMG, Rothschild also counted the Chinese nuclear group CGN as one of its clients. Rothschild’s former director, Oliver Letwin, was at the time a prominent MP in the Conservative Party and in his role as Minister of State for Government Policy, he reassured a security review regarding fears about PRC involvement in Hinkley. The Conservatives’ coalition partners, the Liberal Democrats, were traditionally anti-nuclear but were won over after an impassioned speech at their party conference by Ed Davey MP, the then Energy Secretary. Davey pushed the deal both in Parliament and in public, telling the former that “people should not worry” about PRC involvement. Davey’s work paid off and the deal was eventually signed. He went on to take a lucrative position with lobbying firm MHP Communications, long term advisors to EDF, the French side of the Franco-Chinese bid for Hinkley.

This pattern is repeated in the case of Lazard, a financial advisory and asset management firm. My research revealed strong links to the Chinese party-state, and remarkably, both EDF and the UK government who Lazard advised in regard to the Hinkley deal. Lazard launched its China practice from Hong Kong in 2001 before a successful and rapid expansion into the PRC. The firm has generated extensive profits from cooperation with groups deeply embedded within the party-state structure, not least China Development Bank, the funder behind CGN’s Hinkley bid. Further clients include the PRC’s own $200bn investment fund. Both clients are discussed in a Wall Street Journal article examining the firm’s progress in the PRC, entitled “China Loves Lazard”. At the same time that Lazard earned £2.6 million from the Department for Business, Energy and Industrial Strategy (BEIS) of the UK government for its advice on Hinkley, it was also an advisor to EDF, the developer in the French side of the bid to construct Hinkley. As British political magazine Private Eye has commented, there are such extensive links between senior staff at Lazard and the Department for BEIS that the department “treat Lazard like helpful friends”.

And yet there is so much more to this story than the links between advisory groups and commercial Hinkley stakeholders. Political actors also played a dubious role. The All-Party Parliamentary Groups (APPGs) are cross-party clusters of British MPs that discuss specific topics. These are often sponsored by corporate groups. The sponsors enjoy a range of benefits, in the case of the China APPG for example, sponsors can attend and design events, provide input into organisation and content of events, and even select speakers. There are three of these parliamentary groups that relate to Hinkley: The China APPG, the Nuclear Energy APPG, and the Energy Studies APPG. All three have received sponsorship from EDF – the central commercial stakeholder in Hinkley. In addition, members of the Energy Studies APPG were taken to China by China General Nuclear to visit their Taishan site at a cost of over £52,000 to the Chinese party-state energy group. After the trip, the APPG’s chair, Ian Liddell-Grainger, reported back to Parliament that PRC state group CGN was working “hand in hand with EDF to develop as a major nuclear player, as well as develop its own reactors, and we were taken to see the working EPR in Taishan. It is very good; it does the job that CGN set out for it to do”. In addition, Energy Studies APPG records show that the secretariat role is typically held by employees of the Nuclear Industry Association. This is the same industry body that eventually employed nuclear policy architects John Hutton and Tim Stone.

Perceptive readers may wonder whether or not independent academics were able to provide impartial advice to the British government. Due to the increasing corporatisation of higher education, academics do not necessarily counter-balance corporate lobbying efforts. When the House of Lords science and technology committee produced a report into the UK’s nuclear energy requirements it employed Professor Tom Scott from the University of Bristol as its “specialist advisor”. Due to the university’s proximity to Hinkley, the University of Bristol established the South West Nuclear Hub, co-directed by Scott. This body, according to its literature, “provides a unique location for academia, industry and government to come together to meet the opportunities and challenges facing nuclear energy”. As well as Scott’s positive comments provided to the BBC about the deal, the university has hosted both EDF and CGN on site. As a member of the Nuclear Industry Association, the South West Nuclear Hub presented an “NIA International Group Meeting” at the university in 2018. The event provided a platform for representatives from both EDF and CGN. Two months later the university again hosted guests from the Chinese nuclear sector, this time in a seminar entitled “The story of the UK HPR1000 reactor”. HPR1000 is the industry name for the Hualong One reactor, the Chinese-designed reactor that CGN had hoped to install at Bradwell. The talk included guest speaker Ms Liu Man, speaking on behalf of CGN. It is logical that UK policymakers require expertise such as Scott’s for the science and technology committee report. Likewise, universities play a vital role in the public discourse surrounding important issues such as nuclear power and those involved in such projects. The question here is whether academia itself is subject to the same forces that have compromised government policy. My freedom of information request to the university revealed that in 2019 alone, EDF, French side of the Franco-Chinese team behind Hinkley, invested £1.3 million in research at the University of Bristol. Of this, £210,000 was provided to the body that Professor Scott leads.

The picture presented here is not untypical and covers only part of the network around the decision to build Hinkley Point C nuclear power station. I believe the situation is comparable in other western countries, especially the United States. Recently, we have seen a degree of pushback, most notably from those who draw upon the alternative frameworks mentioned in part one of this article, such as ideology, security or even religion. The case here demonstrates that to find a solution to the puzzle of PRC engagement, we must address a far bigger question surrounding the nature of governance. As long as government acts in a way more akin to a commercial conglomerate than a sovereign state, these problems will endure. At present, the interactions between western institutions and the PRC are characterised by transactions in which the western partner is often able to extract financial benefit, but at the cost of something much more fundamental. When money buys compliance, silence, and legitimacy, we pay with our liberty, integrity, and repute.

There are some measure we can take to allay the worst of the harm. In the UK, for example, the Advisory Committee on Business Appointments (ACOBA) must be strengthened. For the most part, the committee rules (for the most part) on appointments of former ministers, senior civil servants and other crown servants to business entities after leaving politics. ACOBA must be given greater scope and powers to prevent conflicts of interest where commercial groups, other states, and commercial groups closely linked to other states, bring officials into their orbit. Other measures should include greater transparency surrounding the money that facilitates and informs wider debate (most notably via think-tanks, academic institutions and media platforms). The case above also shows the acute need for legislation to prevent conflicts of interest when commercial groups advise government whilst being paid by stakeholders in the matters they are assessing. But much more than these, we must reconsider the parameters by which we measure value as a society. Make no mistake, these are the first steps of a long journey.

This is part two of a two-part article. Part one can be reached here.

Martin Thorley is a PhD candidate at the University of Nottingham. He explores international engagement with China and Sino-British relations through investigative research. He is a MERICS China Talent Program early career professional (2018). He tweets @METhorley.