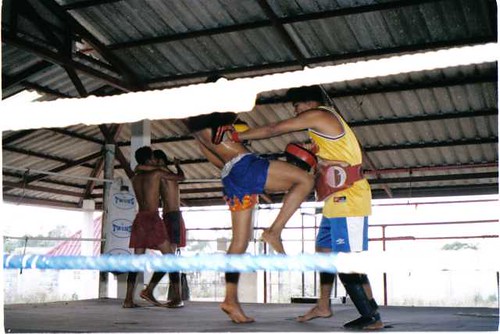 Muay Thai is undoubtedly Southeast Asia’s best known indigenous sport. Raucous, violent, colourful and even pungent – a Muay Thai bout is nothing if not an assault on the senses. A physically gruelling combative ring sport conducted as prizefighting, Muay Thai pugilists are allowed the use of their fists, elbows, knees and kicks in a rationalised format derived from Queensbury Rules. Each Muay Thai bout is accompanied by music and preceded by a ritual dance called a Ram Muay.

Serving as a key symbol and vehicle of Thai nationalism, both at home and internationally, Muay Thai evinces the central tropes of masculine archetypes – cultural values of prowess and perseverance, breadwinning and social mobility – and embodies connections to Thailand’s version of national history.

Muay Thai consequently plays an important part in Thai tourism and popular cultural export, and has attracted legions of practitioners internationally. But it has a rather less palatable side as well, marked by substantial rates of traumatic and chronic injury, child exploitation, gambling, cheating, and ties to organised crime.

Capitalising on the international demand for Muay Thai training from elite Thai fighters, retired pugilists can now make a comfortable (and to them, prestigious) living teaching Muay Thai to foreigners.

Muay Thai as a cultural artefact is pervasively exalted as embodying Thailand’s ‘warrior spirit’, a presumed national trait that allowed royalty of old to establish the Siamese kingdoms and fend off foreign invaders. Much has been made of a rather sparse set of historical references in Thai historical chronicles that allude to Muay competitions, and these references in turn serve as the founding myth conjoining Muay Thai to royalist history.

Such an esteemed connection to royalist national history helps to legitimise Muay among its practitioners. This is an important aspect, given that in Thailand, Muay is fought almost exclusively by the lower class, for whom it serves as a practical path of economic mobility in addition to its symbolic value. Muay Thai boxers come largely from poor agrarian backgrounds and have few options available to them for advancement. Children and adolescents, in particular, who may otherwise be a drain on family resources, can instead contribute significant sums of money if they are even moderately successful at boxing.

While they recognise the harsh conditions of their exploitation, they can valorise their status as boxers both because of Muay’s royalist historical symbolism and because it evinces rural values of fortitude and of being the breadwinner for the family. Muay Thai proponents also argue that as a sport for the lower class, Muay helps keep disadvantaged children away from gangs and methamphetamine and thus performs a vital social service.

Over the last 10–15 years, successful boxers have new options open to them at retirement – namely, to become trainers in the burgeoning Muay Thai camps which target foreign tourists. Camps are opening throughout the country, though they are mainly concentrated in the south, especially on the resort island of Phuket. Capitalising on the international demand for Muay Thai training from elite Thai fighters, retired pugilists can now make a comfortable (and to them, prestigious) living teaching Muay Thai to foreigners. In the past, boxers were largely ‘washed-up’ once they retired; now they can be revered as the stewards and masters of ‘authentic’ Muay Thai.

While Thailand has profited greatly in terms of money and prestige from the commodification and internationalisation of Muay Thai, the sport nevertheless has a number of aspects that are equally well known but far less savoury. These are – in Herzfeld’s felicitous terminology – the ‘culturally intimate’ dimensions of Muay Thai. Chief among these is economic exploitation (especially of children), in which cheating and underpaying boxers their winnings is legion.

The social welfare of boxers is also of concern, as there is very little help or resources available for boxers once they have left the sport or when the physical impact of brutal competitive boxing begins to take its toll. Children are especially vulnerable; in Thailand, Muay Thai practitioners start their training early – often as young as eight years old, or even younger – and they fight full contact and typically without safety equipment. Although a law was promulgated in 1999 with the intention of increasing the safety of child participants (and restricting anyone under 15 from prizefighting), the law was subsequently watered down and has been routinely ignored.

Recently, amendments to the 1999 law have been introduced through a bill in parliament, which would bar children under 12 from boxing. This move was driven by concerns about brain injuries which were amplified soon after the bill was written by the death of thirteen-year-old boxer Petmongkol Sor Wilaithong (real name: Anucha Thasako) in November 2018. Predictably, the boxing world has protested against the law, arguing that it would irrevocably damage the national sport because successful Muay Thai boxers need to start young in order to develop their ‘boxing bones’.

Amendments to the 1999 law also target another ‘culturally intimate’ aspect of Muay – the role of gambling and its associated corrupt practices. Fixed fights have been a constant scourge in Muay Thai circles, tarnishing the sport and compromising the integrity of boxers. Amendments proposed in 2018 would criminalise fixing fights with prison sentences of five to ten years as well as hefty fines.

Corruption in Muay Thai is an open secret, a persistent and intractable blight driven by Muay’s gambling economy. It is equally true, however, that the gambling economy sustains Muay Thai as a sport. Without gambling, there would be no money for boxing purses, and Muay would wither and even disappear as a form of public entertainment.

The future of Muay Thai in Thailand is hard to predict. On the one hand, it is being strongly championed by conservative forces with a vested interest in royal historical symbolism, such as the Department of Cultural Promotion in the Ministry of Culture. It is also increasingly popular internationally, where the ‘de-sportisation’ of competitive martial arts into forms like ‘Ultimate Fighting’ and Mixed Martial Arts (MMA) means they rely on Muay Thai as a staple skill.

International Muay Thai is also witnessing a rise in female participation, which is in turn expanding the interest of Thai women in the sport. On the other hand, Muay is still stigmatised in status-conscious Thai society as being a lower-class pursuit, and the middle class has therefore turned to other combative sports, especially Taekwondo, to avoid the stigma associated with Muay. In addition, conservative proponents are aghast that Muay is being increasingly subsumed into MMA, and losing its cultural identity in the process. How Muay Thai will emerge from these conflicting agendas and interests remains to be seen.

Professor Peter Vail is an associate professor in the University Scholars Programme (USP), National University of Singapore. He received a BA in Rhetoric at the University of California, Berkeley; an MS in Linguistics at Georgetown University; and an MA/PhD in Anthropology at Cornell University. His research interests range from sociolinguistics (studying language use in everyday life) to a wide variety of cultural and social issues among minority peoples in Thailand, Laos and Cambodia.

Football in Hong Kong
The stadium as a site for mourning: Emotional labour and fandom at the match in East Java