The origins and customs of the Chinese New Year 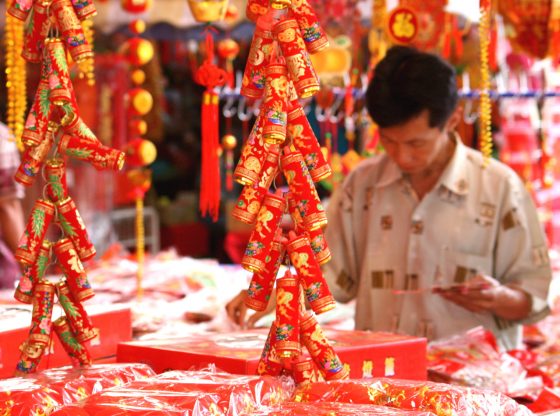 With information available everywhere and easily searchable nowadays, people are pretty much aware of what goes on during the Chinese New Year, or the Lunar New Year, as it is also known. In this short article I aim to provide some background information regarding this, the largest traditional Chinese festival of the year.

Based on the moon’s revolution around the Earth, the lunar calendar would have been about 11 days shorter each year than the solar calendar. However, to synchronise this with the time the Earth needs to rotate around the sun, the Chinese ancestors cleverly added a leap month to the lunar calendar every two or three years. In addition, they also divided each year into 24 Jieqi (solar terms) of 15 days each.

The first solar term is Lichun (Beginning of Spring), which covers the 15-day period of Chinese New Year. Since the festival is based on the lunar calendar, it is also called Lunar New Year in Chinese communities all over the world. It is also due to the lunar calendar that the Lunar New Year falls on a different day each year, somewhere between late January and early February. In 2020 the New Year starts on 25 January.

Based on their studies of archaeological finds, Chinese archaeologists and historians have traced the activities of the Chinese New Year celebration to year-end rituals … as early as the Shang dynasty (1600–1050 BCE)

The Chinese have a special way of recording years, a practice that allegedly started in 2600 BCE. Unlike Westerners, who see time progress in a linear way, the Chinese see it advance in repetitive sexagenary, or 60-year cycles. Each of these, in turn, consists of five 12-year minor cycles.

Each year in a sexagenary cycle is named with a combination of two Chinese characters. The first comes from a set of terms that the ancient Chinese called Tiangan (Heavenly Stems). The second character comes from another set of terms named Dizhi (Earthly Branches). This sequence of combinations creates a total of 60 unique terms, with the first being Jia-zi, which is now a synonym for ‘sixty years’.

Each of the 12 years in a minor cycle is represented by an Earthly Branch term combined with the name of a specific animal. These are: Zi-shu (Rat), Chou-niu (Ox), Yin-hu (Tiger), Mao-tu (Rabbit), Chen-long (Dragon), Si-she (Snake), Wu-ma (Horse), Wei-yang (Goat), Shen-hou (Monkey), You-ji (Rooster), Xu-gou (Dog) and Hai-zhu (Boar), always in that order. Normally people tend to drop the Earthly Branch prefixes and use only the names of the animals for short. After their birth, each Chinese person acquires an animal sign – that is, the animal of their birth year, known as Shengxiao, which literally means ‘birth likeness’.

Unlike the Western zodiac signs that represent the movement of the constellations around the sun, Shengxiao, or the Chinese zodiac animals, do not correspond to any constellations. The ancient Chinese assigned that task instead to the Xiu system, which translates as the ‘Twenty-Eight Mansions’. Similar to the Indian Nakshatra, the Chinese system reflects the movement of the moon through a sidereal month instead of being based on the sun.

The ancient Chinese saw the sky as divided into four regions, each of which is home to seven mansions. Each of the four regions is assigned an animal name, namely: Azure Dragon, Black Tortoise, White Tiger and Vermilion Bird. The 28 mansions also bear the names of different animals, the majority of which can be found in Shengxiao. The other animals in the Xiu system include: ape, leopard, moose, deer, wolf, fox, raccoon, swallow, bat, pheasant, as well as a couple of mystical creatures.

Some argue that Shengxiao, or the Chinese zodiac animals, are derived from the Twenty-eight Mansions system, although to call Shengxiao ‘zodiac animals’ is somewhat misleading: while it is true that etymologically the term ‘zodiac’ has something to do with animals, it is universally understood as being related to an imaginary belt of the heavens.

And while the Chinese Xiu system may relate people’s lives and their place of birth or residence to certain constellations, it definitely does not make a link with the Shengxiao animals. The concept of treating the animals as signs of divination originated from the animals themselves upon the Earth.

Traditionally, the Chinese have a belief system based on animalism and naturalism, meaning that the gods are manifested in natural objects as well as living creatures. The ancient Chinese believed that animals behaved differently because they were possessed by the souls of their ancestors with different personalities. This type of belief was based on the worship of animal spirit totems. The use of compatibility astrology which combines the signs of the Western zodiac with the Chinese Shengxiao is a very contemporary phenomenon.

As for the origin of the Chinese (Lunar) New Year, the Chinese themselves constantly wonder about this. Answers are nevertheless very elusive. Based on their studies of archaeological finds, Chinese archaeologists and historians have traced the activities of the Chinese New Year celebration to year-end rituals offering sacrifices to gods and ancestors which took place as early as the Shang dynasty (1600–1050 BCE).

The tradition of having the rituals take place on the first day of the Chinese calendar year was introduced during the reign of Emperor Wu of the Han dynasty (140–87 BCE). The festival was gradually formalised during the Sui (581–618) and then the Tang (618–907) eras.

Meanwhile, the festival’s name evolved from Gaisui (Change of the Year) to Suichu (End of the Old Year). Later on, the name Yuandan (The First Day) took over and remained until the founding of the Republic of China (ROC) in 1911, when the Gregorian calendar was introduced. The new government led by Dr Sun Yat-sen decided to assign Yuandan to the first day of the Gregorian calendar, and named the first day of the lunar calendar year ‘Spring Festival’.

Haiwang Yuan is a Professor at Western Kentucky University and a Guest Professor in the College of Foreign Languages (CFL) at Nankai University. He has authored and co-authored several monographs on Chinese-related topics in English and published widely in the United States and Great Britain. His publications include Mastering Advanced Modern Chinese through Classics (Routledge, 2018); Chinese Proverbs for Mandarin Classes: Book 1 (Berkshire 2018); and Tibetan Folktales (Libraries Unlimited, 2014).

The stadium as a site for mourning: Emotional labour and fandom at the match in East Java
The importance of film diplomacy for cultural relations between the UK and China