Home /Iran, Pakistan, US-Iran Tension/Existing military-economic tensions in the Middle East and their implications for Pakistan 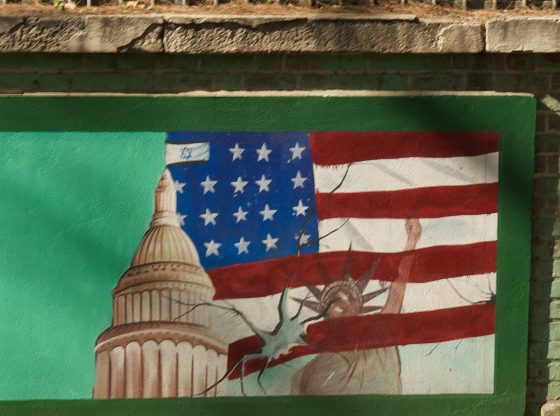 Image Credit: On the Wall of the [Former] US Embassy Compound, Tehran by A.Davey/Flickr; licence CC BY 2.0.

Many thought that the start of a new decade would herald new hopes of peace in the Middle East. However, events in the very first week of January 2020 rapidly extinguished such thoughts. Incidents such as the killing of General Qasem Soleimani, a senior Iranian commander, near Baghdad International Airport on 3 January followed by Iran’s retaliatory ballistic missile attacks against military bases in Iraq hosting US and coalition troops on 8 January brought a region already enmeshed in conflict to the verge of all-out war.

The renewed regional tensions once again place Pakistan in a difficult position. Islamabad has always tried to play a conciliatory role between Saudi Arabia and Iran, and Prime Minister Imran Khan visited both countries after the 2019 United Nations General Assembly meeting in an effort to quell tensions. Following these more recent events, Pakistan’s Foreign Minister Shah Mahmood Quereshi also completed a two-day visit to both countries, stressing that an escalation in tensions was not the answer and nor was it in anyone’s interest.

Neutrality is Pakistan’s only option

However, Pakistan’s decision to withdraw from the Kuala Lumpur Summit in December 2019 after pressure from the Saudis left Islamabad in an awkward position. The summit was held under the joint leadership of Iran, Turkey and Malaysia, and many dubbed Pakistan’s non-attendance a diplomatic disaster, since it placed Pakistan’s neutrality in question.

Even though the official statement claimed that Pakistan did not attend the summit so as to prevent divisions within the Muslim world, many analysts agree that Imran Khan’s decision was a result of the country’s economic challenges, forcing him to prioritise relations with Saudi Arabia over anything else. The latter country, along with the United Arab Emirates (UAE), provided Pakistan with loans and investment of over USD 30 billion at the start of 2019, and repayment of the loans is due to begin this year.

There is no doubt that Pakistan’s geopolitical value has increased against a backdrop of regional tensions. However, it is important to bear in mind that the relationship between Pakistan and the United States is synonymous with a marriage where divorce is not a possibility. Given that after nearly 15 years of agitation, Pakistan and Iran only recently started working to secure their 900km-long border from cross-border insurgency, Pakistan cannot afford to side too blatantly with the anti-Iran coalition.

In regard to Afghanistan, Pakistan has a stake in the Afghan peace process. However, after January’s recent tensions there is now also the question of whether Iran will sabotage the ongoing peace talks. Several reports allege that the insurgent groups within Afghanistan receive ammunition from Iran’s Islamic Revolutionary Guard Corps (IRGC). Tehran has also on various occasions run training camps for the Taliban.

If there is a war in Afghanistan – whether direct or through proxies – there could be a further influx of refugees into Pakistan, which would compound the country’s security problems. Quite apart from the external threat, it should not be forgotten that Pakistan also faces major domestic upheaval in the event of a war, given its significant Shia population which will almost certainly back Iran if there is any unrest.

However, that said, damaging the peace process through the use of proxies would not help Iran for three reasons. First, it would bring an influx of refugees into its territory. Second, it cannot afford to displease its two partners, Russia and China, since both countries are firm advocates of the peace process. And third, failure of the peace talks would mean the continuous presence of hostile American troops in Iran’s backyard. Therefore, it can be safely said that Pakistan need not fear any implications from the present regional tensions on that front.

In the domestic arena, it should be noted that any regional turmoil has an adverse impact on the Pakistani economy. During the recent tensions, gold prices in Pakistan hit an all-time high. It was a similar case with oil prices: the price of Brent crude oil increased by four per cent following the assassination of General Soleimani.

Apart from energy imports, the strait is also a major trading route for Pakistan and the Gulf states. Any warfare along this route would have detrimental consequences across the region. With a focus on reaching economic stability, the government of Pakistan cannot afford to be part of any military tussle. It needs to set its own house in order first.

Within Pakistan, thanks to a variety of measures to eliminate domestic terrorism, there has been a reduction in such incidents. However, the country continues to face both internal and external conflict from various other sources. It is important for Islamabad to design a sound, holistic strategy which keeps its interests to the fore.

Delicate as it is, Pakistan needs to maintain a balance in all of its relations. The message from the Pakistani side is clear: ‘Pakistan is ready to play its role for peace, but it can never again be part of any war’. Neutrality is Pakistan’s only option.

Arhama Siddiqa is a Research Fellow based at the Institute of Strategic Studies, Islamabad, Pakistan.