One country, two identities: The divergence of national identities in Hong Kong 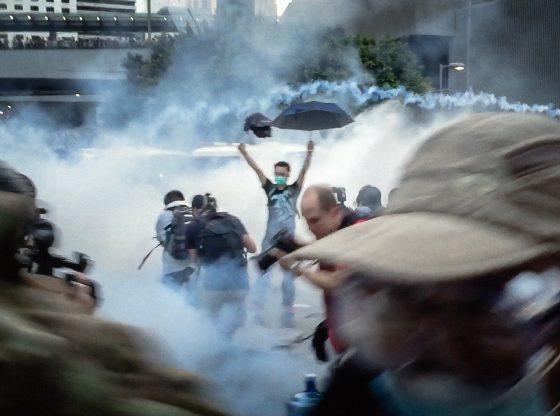 Ever since Carrie Lam, the Chief Executive of Hong Kong, proposed the extradition law amendments in June 2019, this semi-independent Special Administrative Region (SAR) has been embroiled in prolonged protests and various forms of civil and uncivil disobedience, collectively referred to as the Anti-ELAB Movement.

Protesters and activists argue that the extradition bill was emblematic of Beijing’s encroachment on Hong Kong and its attempt to integrate Hongkongers ideologically with the mainland, contrary to the official policy of ‘One Country, Two Systems’. In addition to demanding a complete withdrawal of the bill, protesters also called for dual universal suffrage that would grant Hongkongers the political freedom to vote independently for the SAR’s Chief Executive and members of the Legislative Council.

The current wave of protests in Hong Kong amplifies Hongkongers’ desire to construct a national identity separate than the one sanctioned by Beijing, and to have a political future free from Beijing’s interference

By demanding the right to elect their own political leaders, Hongkongers are challenging Beijing’s authority and ideological influence over them. In a poll conducted by the University of Hong Kong in June 2019, when the movement first began, 75 per cent of people aged between 18 and 29 identified as ‘Hongkongers’ rather than ‘Chinese’, ‘Chinese in Hong Kong’ or ‘Hongkonger in China’.

The current wave of protests in Hong Kong amplifies Hongkongers’ desire to construct a national identity separate than the one sanctioned by Beijing, and to have a political future free from Beijing’s interference. This desire has been reinforced over the past decade by Beijing’s ongoing human rights violations and suppression of dissent. Hence, Hongkongers’ cultivation of a separate national identity cannot be separated from their anti-authoritarian struggle and yearning for political freedom.

Hong Kong was a British colony from 1841 to 1997. Under the British colonial administration, Hong Kong experienced tremendous economic success beginning in the 1970s. Around the same time, eager to build up its international reputation as a benevolent regime, the colonial government implemented sociopolitical changes that dramatically enhanced the quality of life of Hongkongers. The colonial government later allowed and encouraged Hongkongers to participate in the election of district officials and members of the Legislative Council, which planted the seed for electoral democracy.

While Hong Kong was experiencing swift political and economic progress, mainland China was embroiled in the Cultural Revolution. Because of the economic disparity and ideological differences between the British colony and the rest of mainland China, Hongkongers began to define their identity as distinct from the rest of China. Despite the large-scale migrations of mainland Chinese people into Hong Kong in the late 1970s and early 1980s, Hongkongers continued to see themselves as the exception to mainland Chinese because of their ideological and cultural differences.

Hongkongers’ sense of belonging and national identity first started to develop after the Chinese Communist Party (CCP) came to power in mainland China in 1949, and it has continued to diverge ever since. While Hongkongers increasingly demand democracy and political freedom, the CCP has been actively suppressing political dissent. After the Tiananman Massacre in 1989, Hongkongers were vocal in their support of the pro-democracy activists in mainland China who were persecuted by the CCP, and they continue to hold an annual vigil in June to mourn the victims of the incident.

Due to ongoing reports of human rights violations perpetuated by the CCP before the handover of Hong Kong, many Hongkongers – who at the time were still British colonial subjects – did not wish to be reunited with mainland China. Nor did they share the nationalist sentiments the CCP attempted to cultivate. In fact, prior to 1997, many Hongkongers obtained passports and citizenship of foreign countries so that they could escape mainland Chinese rule.

Since the return of Hong Kong’s sovereignty to China in 1997 and alongside the policy of ‘One Country, Two Systems’, Beijing has implemented a wide range of sociopolitical and economic policies to integrate the SAR more closely so that Hong Kong would become economically dependent upon mainland China. Most significantly, these policies have sought gradually to mould Hongkongers’ sense of belonging so that they would subscribe to the national identity defined by the CCP.

Even prior to the current wave of protests and the widely known Umbrella Movement in 2014, Hongkongers participated in large-scale protests against Beijing’s violations of human rights and its suppression of universal suffrage in the SAR, which began soon after the return of sovereignty to China.

Beijing’s most overt attempt to integrate Hong Kong came in 2011, when the Beijing-backed Hong Kong government introduced the Moral and National Education (MNE) curriculum, including a teacher’s handbook that unequivocally endorsed the CCP regime. Under this proposal, all schools in Hong Kong were told to implement the teaching of MNE as a mandatory subject.

This curriculum was perceived by pro-democracy activists and educators in Hong Kong as Beijing’s attempt to brainwash Hong Kong students. In 2012, led by middle-school student Joshua Wong and the advocacy group Scholarism, tens of thousands of protesters – including teachers, students and parents – surrounded the offices of the Hong Kong government. Eventually, the Hong Kong government agreed to shelve the proposal permanently.

The controversy surrounding MNE concretised Hongkongers’ sense of belonging and identity as being separate from that of mainland China. A few years later, Joshua Wong and other pro-democracy activists led the Umbrella Movement – a large-scale campaign of civil disobedience – to demand universal suffrage free of interference from Beijing.

While the Umbrella Movement was not successful in bringing forth electoral democracy, it did cement Hongkongers’ belief that the SAR’s political future and their own national identity ought to be distinct from the ones being defined by Beijing. This belief was only intensified after five booksellers were kidnapped and detained by the Chinese government for selling books banned by the CCP.

It has to be said that the current wave of protests and resistance in Hong Kong is not motivated by optimism and hope. Rather, Hongkongers believe that this fight is their last chance to push back against the CCP regime. The activities of the Anti-ELAB Movement coincide with numerous reports that Beijing has been committing horrendous human rights abuses against the Muslim minority (Uyghurs) in Xinjiang.

The protesters therefore see the Anti-ELAB Movement as far more than simply the assertion of Hong Kong’s identity separate from Beijing. They see it as an orchestrated resistance against the CCP regime that suppresses political dissent through violence. Hence, Hongkongers’ perception of their national identity hinges upon political freedom and solidarity with others who are oppressed by the state.

Shui-yin Sharon Yam is an Assistant Professor in the Department of Writing, Rhetoric and Digital Studies at the University of Kentucky. She recently published Inconvenient Strangers: Transnational Subjects and the Politics of Citizenship (Ohio State University Press, 2019) as well as several academic articles related to nationalism in Hong Kong and mainland China.

A clash or reconciliation of nationalisms across the Taiwan Strait?
Shaolin, wuxia novels and nationalism