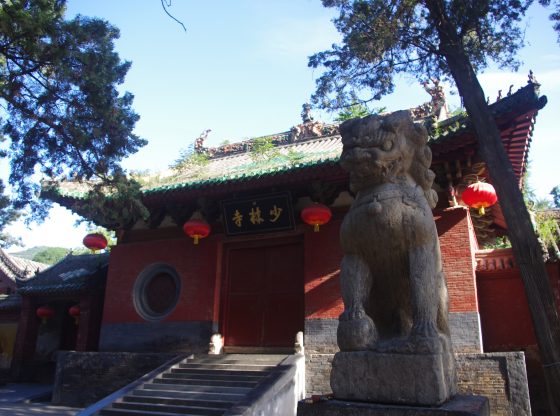 Image credit: Photo by the author.

Shaolin Monastery in Dengfeng, Henan Province (also known as Shaolin Temple) was built around 496 by Emperor Xiaowen (467–499) of the Northern Wei dynasty (386–534) for the Indian monk Batuo (跋陀), who had travelled to China to spread Buddhist teachings. It carries two important symbols of nationality for the Chinese: Chan Buddhism and kung fu, both regarded as national codes of traditional Chinese culture.

This article explores the relationship between Shaolin, wuxia novels and nationalism, and explains how Chinese novelists used Shaolin and Shaolin kung fu in the construction of a modern national identity among the Chinese in the first half of the twentieth century.

After the establishment of the Republic of China in 1912, fuelled by a modern Chinese nationalism that focused on anti-imperialism, national unity and national revival, the practice of Chinese martial arts became widely recognised as a basic approach to building people’s fitness, strengthening the nation and achieving national salvation.

Given that Shaolin and Shaolin kung fu are an important segment of Chinese martial arts, they frequently appear in wuxia novels, and the history of Shaolin and the legends of Bodhidharma (达摩) and Kinnara King (紧那罗王) are incorporated into the stories.

‘Shaolin is a vast Buddhist monastery with a long history. It sits underneath Mount Song in the centre of the country. It normally accommodates between three hundred and five hundred monks. After the First Patriarch, Bodhidharma, achieved enlightenment, he left the formulas for internal martial arts training. In the Daye period of the Sui dynasty, a monk who worked in the kitchen fought off hundreds of rebels with a staff. After that, Shaolin staff methods became a school of Chinese martial arts.’

Nationalism was one of the driving forces behind the rapid development of wuxia novels in early twentieth-century China. These novels served the inheritance and preservation of the core values of Chinese tradition and stressed a sense of pride. They also provided readers with psychological compensation for foreign aggressions, imperialist expansion, warlordism, ineffectual government and economic hardship, and functioned as an effective ideological instrument that contributed to the construction of national and cultural identities.

Following the establishment of the Republic of China in 1912, Han nationalists moved away from anti-Manchuism and promoted the new idea of ‘Five Races under One Union’, hoping to quell potential ethnic conflicts in China and reinforce a sense of national unity among all the ethnic groups. However, anti-Manchu sentiment still ran high, dominating the mindsets of many Chinese people. This is reflected in several wuxia stories, especially those based on the Xilu legend (西鲁故事) of the Heaven and Earth Society (Tiandihui 天地会/ Hongmen 洪门), an influential secret society which advocated pro-Ming and anti-Qing ideologies.

According to this legend, monks from Shaolin answered the call of the Kangxi emperor (1654–1722) to fight against the Xilu barbarians. After defeating the barbarians, the emperor rewarded the monks with official posts, but they declined and returned to Shaolin. The emperor was convinced by a scheming official that the monks might use their military power to launch a rebellion, so he dispatched troops to eliminate Shaolin. The Qing army burned down the monastery and killed almost all the monks. Only five monks managed to escape. They then founded the Heaven and Earth Society to support the Ming prince in overthrowing the Qing government and restoring the Ming dynasty, and are known as the Five Shaolin Ancestors (少林五祖).

The Heaven and Earth Society employed Shaolin to build credibility and influence. The Xilu legend was incorporated into the rituals of the Society, turning Shaolin and Shaolin kung fu into a symbol of rebellion and a source of ethno-national identity. Popular novels based on the Xilu legend and the Heaven and Earth Society included: Shaolin Warriors’ Heroic Battles (1931) by Deng Yugong; Teenage Shaolin Heroes (1931) by Jiang Dielu; The Burning of Shaolin Monastery (1930s–40s) by Zheng Zhengyin; and Monk Sande’s Three Visits to Xichan Monastery (1948) by Chen Jing.

The names of the main characters of these novels, such as Chan Master Zhishan (至善禅师), Monk Sande (三德和尚), Fang Shiyu (方世玉) and Hong Xiguan (洪熙官) are mostly taken from a late Qing novel, The Prosperous and Great Qing Dynasty, in which they are described as villains from the Shaolin School. However, due to the change in popular social and political ideology after the fall of the Qing dynasty, these fictional kung fu masters with a Shaolin background were later portrayed by a new generation of novelists as folk heroes who used superior combat skills to fight the evil forces backed by the Manchu government.

For example, the plot of Monk Sande’s Three Visits to Xichan Monastery is based on the conflict between the Shaolin School and the Wudang School and it clearly spells out anti-Manchu sentiment:

‘Chan Master Zhishan assembled his disciples in the abbot’s room and announced: “Today’s Shaolin and Wudang are like ice and coal that cannot co-exist. Wudang assists the Qing government to suppress our revolution. If we want to restore the Ming dynasty, we must defeat the Wudang School first”.’

The Wong Fei-hung/Huang Feihong (黄飞鸿) series is another popular genre of wuxia novels published in the 1930s and 1940s. The plots are based on the legendary stories of Huang Feihong (1847–1924), a famous kung fu master, physician and folk hero from Foshan, Guangdong Province. In these stories, Huang Feihong is described by disciple Lin Shirong (1861–1943) as an anti-Manchu rebel and the inheritor of Hongquan (洪拳) as passed down from Chan Master Zhishan who survived the destruction of Shaolin.

After Huang Feihong died in 1924, stories about him became the subject of many popular wuxia novels composed by Cantonese writers. He was shaped into an idealised image that represented traditional Chinese virtue and strength. Popular titles included: The Supplementary Stories of Wong Fei-hung (1933) by Zhu Yuzhai; Wong Fei-hung (1938) by Dai Shaoyu; The Legend of Wong Fei-hung (1942) by Xu Kairu; and The Story of Wong Fei-hung (1946) by Kuang Qitian. These novels greatly contributed to the spread of Shaolin kung fu culture in the Pearl River Delta region – the birthplace of the Heaven and Earth Society.

To conclude, wuxia fiction novels functioned as an important vehicle for the ‘maintenance and reinvention of nationhood’. They served two purposes: retrieving traditional Chinese culture and constructing a national identity. As the cradle of Chan Buddhism and a centre of Chinese martial arts, Shaolin was regarded as a symbol of indigenous virtue and strength and therefore became a popular theme in wuxia novels.

Living in an era of rapid social transformation and influenced by the prevailing nationalism, Chinese novelists used Shaolin to invent a cultural identity, thus aiding in the construction of a modern national identity among the Chinese. These novels in turn helped Shaolin lay a rhetorical claim to Chinese identity and created a legacy of remembrance which has served in the formation of the nation’s soul and spiritual principles.

Lu Zhouxiang is Assistant Professor in Chinese Studies within the School of Modern Languages, Literatures and Cultures at Maynooth University, Ireland. He is the author of Politics and Identity in Chinese Martial Arts (Routledge, 2018) and A History of Shaolin: Buddhism, Kung Fu and Identity (Routledge, 2019), from which some of this article is taken.

One country, two identities: The divergence of national identities in Hong Kong
The long read: Is cyber-nationalism on the rise in China?