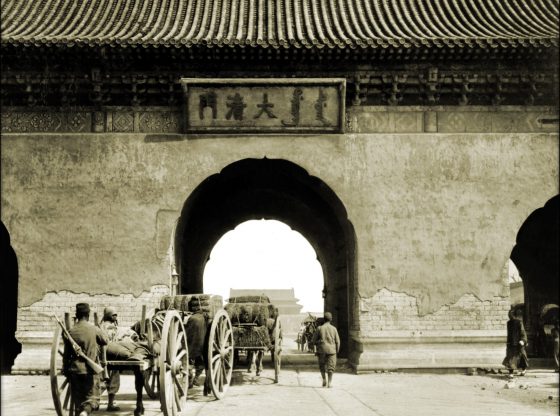 In discussing Chinese nationalism, it is important to first recognise that the Chinese concept of ‘nation’ evolved partly as a reflection of, and partly in opposition to, European colonialism and the models of nation and empire that accompanied it. That is not to say that the nationalism(s) and concepts of nation(s) that developed in China in the later nineteenth and twentieth centuries were solely defined by European models. Given China’s remarkably long history of political, social, economic and cultural complexity, this would be a difficult argument to sustain. Rather it is that the tensions catalysed by European attempts to impose a Western hegemony on China, and the hybridisation between imported and indigenous concepts of state, identity, ethnicity, and political ideology from the early eighteenth century onwards played an instrumental role in shaping what would late be recognized as modern Chinese nationalism.

Most historians trace the development of modern Chinese nationalism to the decline of the Qing Dynasty (1644-1911) in the final decades of the nineteenth century. The weakening of China’s last imperial regime accelerated rapidly following the Opium Wars of the mid-nineteenth century and the effective ceding of Hong Kong and the five Treaty Ports to European (and later US) control in its wake. Unlike vast stretches of the Americas, Africa, India, and southeast Asia, however, the territory composing the Chinese Empire was never fully subsumed to European control, nor did the Chinese government ever become an appendage of European powers. Shu-mei Shih has classified the incomplete assertion of European hegemony in China during this period as ‘semi-colonialism’.

The Qing collapse created the political and cultural space for a range of different movement. Among the most important of these was the coalescing of a diffuse anti-imperialist sentiment that had been growing among the urban intelligentsia in the early decades of the twentieth century, culminating in the May Fourth movement of the post-First World War period. This student-led cultural and political program of resistance to western hegemony was catalysed by Japan’s seizure of the Chinese territory of Shandong. The latter was a move tacitly encouraged by the Entente powers during the war in order to preclude a German occupation and subsequently formalised in the Versailles peace negotiations.  The Shandong humiliation served as an early warning that China’s first post-Qing national government, the Koumintang, would be vulnerable not only to Japanese expansionism but also to internal challenges. The May Fourth movement helped foster a generation of radical intellectuals that would subsequently play key roles in the mobilization of peasants and workers and in the spread of Communist ideals.

One key point of note here is that the early Chinese nationalism could, at best, gloss over profound social, cultural, and ethnic divisions across Chinese society. These divisions had been held in check by the cultural authority of the imperial government, its extensive bureaucracy, and the compromises it was willing to make with powerful political and military figures who enjoyed their own regional power bases and patronage networks. With the collapse of the Qing in 1911, these fractures would widen and continued to foment conflict, both large and small, until the consolidation of power by the Chinese Communists under Mao Zedong.

Another crucial consideration is the degree to which the first coherent form of Chinese nationalism, that propounded by Sun Yat-Sen, founder of the Koumintang, was an amalgam of diverse and often contradictory cultural and intellectual currents, ranging from traditional Chinese philosophy to Marxism and US Progressivism.  As a result, the image of the Chinese nation, and Chinese national identity, was more likely to operate as a cultural addendum of an erstwhile national government’s political and military power as it was to emerge, or be adopted as, a grassroots identity among China’s vast and diverse population.  Ironically, the widespread belief in Chinese cultural superiority was more a hindrance than an aid, since in identifying all foreigners as inferior, it essentially delegitimized both outside concepts of nation and the possibility of a believably threatening ‘other’ against whom a cohesive Chinese national identity could be defined.

The incoherence of Chinese nationalism and China’s perceived weakness in comparison to both European powers and its industrialised, expansionist neighbour, Japan, prompted a fair bit of agonising among Chinese writers and intellectuals, whether travelling in the West or remaining in China itself. Most prominent among these were Sun Yat-sen and Lao She, both of whom spent time in London and whose thought and writing blended both Chinese and Western cultural modes.

Ironically, this perception of weakness was often accompanied, in western popular culture, by widespread anxiety about the potential of this massive population, should it modernise and industrialise, to complete overwhelm Western society

Lao She’s highly-regarded novel, Mr. Ma and Son (1929) depicted two generations of Chinese petite-bourgeoisie in London struggling to come to terms with a British society that afforded their ‘nation’ and culture no respect, and thus expressed open contempt for individuals from it. Ironically, this perception of weakness was often accompanied, in western popular culture, by widespread anxiety about the potential of this massive population, should it modernise and industrialise, to complete overwhelm Western society. The fear of being overrun by a rival ‘race’ had been a long-running trope in certain strains of Western cultural discourse, but it was especially persistent, acute and insidious as it was expressed towards China. From the Charles Pearson’s influential academic study, National Life and Forecast, which provided the intellectual underpinnings to the exclusionary ‘White Australia Policy’ to the Sax Rohmer’s best-selling ‘Fu Manchu’ stories to the wartime hysteria in London over Chinese gambling parlours and opium dens sapping the fighting spirit of British tommies, anti-Chinese discourse abounded.

These and other prominent elements in the cultural and political discourse of Britain and its Empire fostered a fear, openly stated among police officials and colonial administrators, that all Chinese communities everywhere were connected through sinister, clandestine channels. This paranoia manifested itself in a number of ways, from pervasive newspaper stories about the power of ‘Tongs’ and ‘Triads’ to police raids and mass deportations. Regretfully, such anxieties have far from disappeared, and they continue to crop up in ways that obstruct rational policy, encourage racial prejudice, and hamper constructive relations with China on a number of fronts, from interpretations of the Road and Belt initiative to anxieties over the recent coronavirus outbreak.

Sascha Auerbach is a Lecturer in Modern British and Colonial History in the History Department at University of Nottingham, UK. His research interest is in the interaction between individual identity, structures of the state, and ideas about race and gender in the late nineteenth and early twentieth century. He is the author of Race, Law and “the Chinese Puzzle” in Imperial Britain (Palgrave, 2009) and Armed with Sword and Scales: Law, Culture and Local Courtrooms in London, 1860-1913 (Cambridge, forthcoming).

Nationalism, militarism and Chinese support for the use of force
Dispelling the monolith: The geopolitics of language in Taiwan and Hong Kong