Dispelling the monolith: The geopolitics of language in Taiwan and Hong Kong 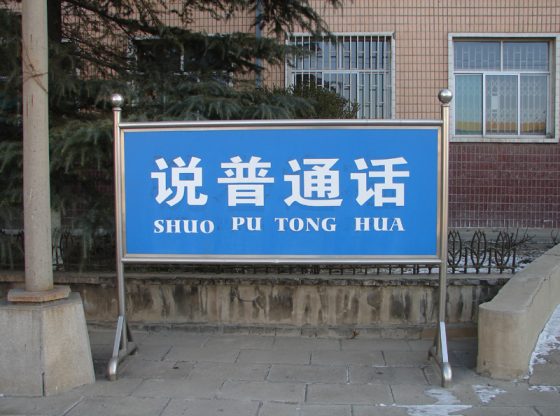 In recent years, the respective Sunflower and Umbrella Movements in Taiwan and Hong Kong have promulgated a resurgence in local identities. The origins of these social movements however are tied to the longer histories of activism in both societies. The democratization of Taiwan in the late 1980s and the efforts towards universal suffrage in post-1997 handover Hong Kong have pushed both places in a synchronizing fashion as these two communities become increasingly identified by their civic identities and common identification with democracy, transparency and the rule of law.

80 percent of Taiwan’s population speaks Taiwanese, while 90 percent of Hong Kongers use Cantonese as their primary language

Another important aspect of these two societies however are the use of local languages that have also become salient markers of ethno-cultural identity. Although Mandarin is spoken in Taiwan and in varying degrees in Hong Kong, over 80 percent of Taiwan’s population speaks Taiwanese (Taiyu) – a distinct variant of the Hokkien language (known in China as Minnanhua) which originated in China’s Fujian province. Meanwhile, approximately 90 percent of Hong Kong’s population uses Cantonese as their primary language, whose linguistic roots originate in neighbouring Guangdong province.

In both cases, historical migration from China to Hong Kong and Taiwan established the use of Cantonese, Hokkien and other Chinese languages as the descendants of these migrants continue to use these languages in everyday life. In Taiwan, the traditionally independence leaning pan-green political camp has had a long history of using Taiwanese language as a distinctive marker of identity in campaigns and rallies. Taiwanese, along with Mandarin, Hakka, Matsu and several indigenous Formosan languages are today the official languages of Taiwan.

More recent attempts in Hong Kong have emerged after the 2014 Umbrella Movement to protect local language and culture in the face of a rising China. Facebook Pages such as the Hong Kong Language Movement have emerged, referring to Cantonese as the language of Hong Kong (Heunggongyu), rather than the language of Guangdong (Gwongdungwaa). These local activists have attempted to change the vocabulary of Cantonese to reflect changing political sentiments, further pushing for a distinctive Hong Kong identity.

China’s response: Out of tune with locals?

In an attempt to reach audiences in Taiwan and Hong Kong, China has attempted to use both Hokkien and Cantonese in its messaging through media and popular culture, eliciting mixed responses from locals in both places.

In the case of Taiwan, Beijing resorted to a strategy of direct coercion in 2018, when it released a dubbed propaganda video in Hokkien titled ‘God of War’. The video featured bomber aircrafts flying around Taiwan, a warning from Beijing for the islands Taiwanese-speaking activists to curb their so-called ‘pro-independence’ activities. However, one of the top comments on the video’s Weibo account which received 100 likes features a laughing emoji with the words ‘real Taiwan accent’, suggesting that the video did not portray an authentic Taiwanese accent, but one closer to a Southern Fujian accent.

In November 2019, the Taiwan Affairs Office (TAO) in Beijing introduced Zhu Fenglian as the new spokeswomen for the office. Zhu, who notably gave part of her introduction in both Hokkien and Hakka, two languages that are spoken in Taiwan. Despite her linguistic abilities, her comments did not deviate from China’s standard rhetoric, criticizing protesters in Hong Kong and refusing allegations of interference in the 2020 Taiwanese presidential election.

In Hong Kong, the local government has been met with controversy after attempting to downplay the importance of Cantonese. Hong Kong’s Bureau of Education made a controversial move in 2014 by stating that although English and Chinese are the official languages in Hong Kong’s Basic Law, it asserted that Cantonese was ‘a Chinese dialect not considered an official language’. This resulted in public backlash whereby the respective pages were eventually taken down.

Chinese State media Xinhua also tried to use Cantonese to their advantage by attempting to charm Hong Kongers in 2017 when it released the song ‘My Hong Kong’ in Cantonese during the 20th anniversary of the handover. However, this video along with other Xinhua videos were met with criticism. Online comments and media noted in particular the lack of colloquial Cantonese lyrics, with one commentator describing it as ‘forcibly singing Mandarin lyrics in Cantonese’ and further noting that Hong Kong’s handover events were ‘all out of tune’.

Despite the fact that languages such as Hokkien and Cantonese have little official support in China, their use in attempting to charm Taiwanese and Hong Kongers suggest that Beijing recognizes to a degree, the importance of language in reaching local audiences. These strategies are a departure from the traditional notion of China as a continuous cultural monolith where the official language of the People’s Republic of China is Mandarin (putonghua), the ‘common language’ of the people.

However, it also signifies Beijing’s top-down mentality when handling issues in Taiwan and Hong Kong with little regard for the local context. Such an approach also lacks an understanding for the nuances between the Taiwanese Hokkien spoken in Taiwan and Hokkien spoken in Fujian, as well as the Cantonese spoken in Hong Kong and its varieties in Guangdong. While variants of Hokkien and Cantonese are used by communities in China, Hong Kong, Taiwan as well as other parts of the Chinese-speaking world, these languages are not uniform entities. Rather, these languages all encompass similar-but-distinct regional variations due to cultural influences (e.g. English loan words in Hong Kong Cantonese and Japanese loanwords in Taiwanese), historical differences (e.g. the legacies of British and Japanese colonialism) and geographical separations (e.g. the physical and political borders that separate these places from China). Cantonese and Taiwanese as a consequence have resulted in different vocabularies, dialects and accents that continue to produce unique markers of distinctiveness for locals in both places.

While China has attempted to use Chinese languages other than Mandarin in Taiwan and Hong Kong to communicate with locals, responses have been lukewarm due to China’s lack of nuanced understanding behind these languages and rather top-down approach to handling local issues. However, if Beijing wishes to further understand the diversity of the Chinese language universe, it does not need to look far. As Cantonese, Hakka, Hokkien, Sichuanese, Shanghainese, Teochew and dozens of other local variants of southern Chinese languages, cultures and cuisines exist on the mainland, China may wish to better learn from how the assertation of cultural and political differences are taking place at home. Such an effort may help the Middle Kingdom to better understand the resurgence of local identities and the rising politics of difference that are occurring across the Sinophone world.

Justin Kwan is a researcher, policy analyst and program manager based in Vancouver, Canada. One of his recent related journal articles is The Rise of Civic Nationalism: Shifting Identities in Hong Kong and Taiwan (2016).