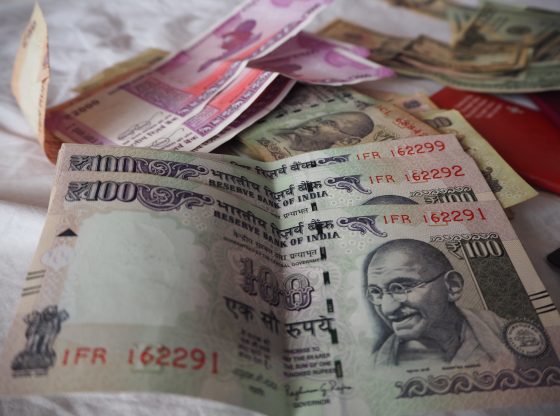 India has long been heralded as the next ‘big thing’ after China, invoking images of a rapidly growing middle class creating markets for Western firms and in turn drawing in large volumes of investment. This exuberance has come about partly as the result of an easy credit-fuelled investment boom in the 2000s, although since then the pace of growth has gradually slowed, crashing to a multi-year low of 4.5 per cent in late 2018.

The latest government growth forecasts put India’s GDP growth at an 11-year low in the fiscal year 2019-20 (April-March). This has been accompanied by a gradual dampening in investor confidence regarding the country. Accompanied by rising inflation, this poses questions as to whether India is now facing a prolonged period of slow growth, potentially even an era of stagflation: that is, slow growth accompanied by high inflation.

The effect of banking and policy woes on business sentiment

India’s banking sector has struggled in recent years because it has been saddled with a high volume of non-performing loans. The banking sector in India is largely dominated by the public sector (which currently accounts for more than 70 per cent of total lending), and the public sector banks, in particular, are struggling to meet mandatory capital adequacy requirements. Not only have the weak balance sheets of these banks depressed lending, but household saving rates have also gradually declined, especially when compared with the rates of saving in the East Asian tiger economies and China during their respective periods of explosive growth.

Meanwhile, market interest rates in India remain stubbornly high, despite multiple interest rate cuts. This is partly because until 2019 banks were required to benchmark their loan rates against their own internal benchmark, called the Marginal Cost of Lending Rate, or MCLR. However, the Reserve Bank of India (RBI, India’s central bank) has since changed the rules, and so now banks are required to benchmark their loan rates against one of four external benchmarks, including the central bank’s policy rate and government Treasury Bill yields.

The challenges posed by the weak transmission of monetary policy are evident in the chart below, which tracks the trend between the RBI’s benchmark repo (repurchase) rate and the MCLR of the State Bank of India (the country’s largest bank by market share).

The banking sector is not the only financial sector facing strong headwinds, however. The non-banking financial sector (which accounts for nearly 30 per cent of lending) has faced major challenges as well. Several key non-banking financial companies (NBFCs), such as Dewan Housing Finance Corporation and India Infrastructure Leasing and Financial Services (IL&FS), have filed for bankruptcy. Given the significant role played by NBFCs in terms of lending, the sector’s liquidity challenges have further accentuated India’s credit crunch.

High risks for business and investment

India’s business environment remains notoriously difficult, and the growing politicisation of institutions – along with the way the government operates – is adding to the risks. For example, in recent weeks it has been suggested by senior members of the ruling Bharatiya Janata Party (BJP) that foreign businesses with ties to Western media outlets that are critical of the government may not be so welcome in the country. Policy flip flops are not unknown in India, and the ruling government has proven to be overly sensitive to criticism, so the risk here is real.

More significantly, however, and despite enjoying the largest parliamentary majority of any government since the 1980s, the BJP government has so far failed to break any ground in terms of major economic reforms – including freeing up land and labour markets – and this is constraining investment in the manufacturing sector. In addition, India’s economy remains relatively protectionist by global standards, and a lack of policy consistency on critical issues including transfer pricing policy has affected the government’s credibility and further eroded investor confidence.

To top it all, the country’s external and government balance sheets remain stressed, which increases risks and has partly contributed to the weak investor sentiment among financial investors. India is known to have a persistently large current account deficit (meaning that it has a surplus in the services account which is overshadowed by a much larger trade deficit). Although a cooling off in oil prices in recent years has kept the current account shortfall relatively stable, investors remain wary about the risks to India’s external account stability from any sudden surge in energy prices – which could be driven by conflict in the Middle East, for instance.

Meanwhile, India’s fiscal situation remains precarious. The central government’s budget deficit is expected to reach nearly 4 per cent of nominal GDP in 2020, and economists remain concerned that India’s fiscal data are underreporting the deficit by excluding off-balance sheet items. Hence the actual deficit is expected to be far greater. In addition, the general government deficit (which includes all levels of government) is even higher.

Two issues arise from this budget deficit challenge. First, foreign investors in Indian financial markets remain cautious about the country’s financial stability. In late 2018, as Argentina and Turkey battled against currency instability, investors in major emerging markets such as India become increasingly risk-averse as they saw the possibility of a contagion effect into these territories. As a result, India saw significant net capital outflows over the period. 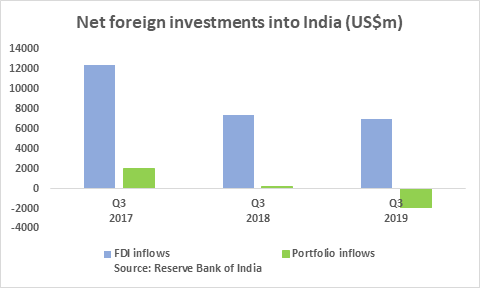 Second, there are more theoretical concerns about how a large budget deficit can crowd out private investment. Different schools of thought have different perspectives on the issue, and the Indian government has become increasingly cautious in this regard. This at least suggests that the government is prioritising fiscal discipline. Nonetheless, rising interest rates in India have proven particularly sticky, and it is unlikely that a drastic narrowing in government demand for money will bring down the cost of borrowing significantly. India’s public debt is still largely domestic, which insulates the government to some extent from currency fluctuations. Therefore, in light of the collapse in private investment demand in recent periods, it might actually be economically prudent to allow for a widening in the budget deficit if it promotes headline growth.

Reviving morale and credibility are key

Owing to a weak domestic economy, foreign investors are losing confidence in the possibility of India being the next big thing after China.

As outlined above, a key policy measure for the government to use in the short term is a fiscal stimulus. This will spur demand and hopefully have a multiplier effect on growth; long-term time-series data from the Organisation for Economic Cooperation and Development (OECD) countries show that fiscal multipliers are more effective during periods of economic contraction, or weak economic activity.

The government’s long-term policy agenda should, therefore, focus on liberalising the domestic economy, creating incentives for investors, and ensuring policy consistency. In the medium term, fixing credit supply in the financial sector, which is reeling from bad balance sheets, is crucial in order to ensure that any growth is sustained.

Shreyans Bhaskar is a graduate student focusing on International Economics and Econometrics at Johns Hopkins University. Previously, he was the Lead Analyst for India at The Economist Intelligence Unit. He tweets @ShreyansBhaskar.

How far will India go with its social agenda in 2020?
Can the BRI resolve China’s economic woes?