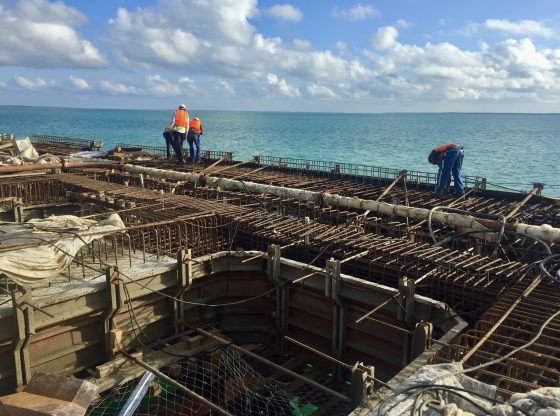 Approaching the berth area of the Lamu port construction site one morning, the shouts of a Chinese foreman rise above the construction noises: ‘Go home! Home! Go!’ His words are directed at a Kenyan manual labourer whose job is now on the line. Bonny (a pseudonym), the Kenyan supervisor accompanying me, rushes over to them and begins to make sense of the incident.

The work carried out by the Kenyan manual labourer had been washed away by the cleaning pumps during the night shift, thus delaying today’s cement work. The Chinese foreman is standing behind the Kenyan worker, pushing him to work faster and warning him not to make mistakes this time around. Bonny talks quickly with the Kenyan worker, and then invites the Chinese foreman to the side of the construction area to talk. They communicate through a mixture of hand gestures, Kiswahili, English and Mandarin words, and their negotiation results in a temporary suspension of the Kenyan manual labourer, who in the meantime has completed his task. This is a common occurrence on the Lamu port construction site in Northern Kenya.

The tender for the construction of Lamu port Phase One was awarded by the Kenyan government – which is also financing this project – to the state-owned enterprise (SOE) China Communication Construction Company (CCCC) in 2013. Lamu port is part of a broader connectivity initiative – the Lamu Port–South Sudan–Ethiopia Transport (LAPSSET) Corridor – which has the goal of connecting Kenya to South Sudan and Ethiopia through a network of cross-border infrastructure.

At the time of my research, the Lamu construction site employed over 1200 workers: around 200 Chinese and 1000 Kenyans. Although this site employs a high percentage of Kenyan workers, none of them are in managerial positions. They also face a high degree of job insecurity due to the arbitrary rules the Chinese foremen create and implement, as well as the lack of unionisation on the construction site.

The vignette described above shows the important role workers can play in reducing job insecurity. Kenyan workers have found different ways of supporting each other within the construction site to navigate their employment conditions. Small instances of resistance or defiance are quite common, and although these acts are almost imperceptible and far from organised actions, they have a concrete impact on the daily lives of workers.

In addition to the example of Bonny’s negotiating ability, Kenyan workers navigate the language barrier by training newly hired locals and checking each other’s work in the pit, thus reducing the risk of job losses. However, Kenyan workers are not the only ones attempting to reduce their job insecurity, as some Chinese workers also contribute in subtle ways to the improvement of working conditions for Kenyan employees.

For instance, soon after Bonny had negotiated the temporary suspension on behalf of the Kenyan worker, as we were walking towards an excavator, another argument started between a different pair of workers, with the Chinese foreman threatening to fire the Kenyan worker. In this instance, Xuefeng (also a pseudonym), a Chinese engineer higher up in the construction site hierarchy, negotiated the transfer of the Kenyan worker to another section of the construction project, thus suggesting that Chinese workers can also contribute to reducing job insecurity for the Kenyans.

Other small instances of resistance by Chinese workers also have an impact on the everyday employment conditions of the Kenyan workers. Take food, for example. Unlike the Chinese employees, who are provided with food by CCCC, Kenyans have to buy theirs from the canteen, but during the long shifts in the berth construction area they cannot do so because of the 2.5 km distance between the pit and the canteen.

Both Kenyan and Chinese workers in this area of the construction site use the breaks to rest in the shade, as temperatures can be as high as 37ºC. According to CCCC regulations, when overtime work is carried out food has to be provided to Kenyan workers as well. Therefore, even on days when no overtime is needed, some Chinese foremen make use of this regulation by discreetly adding one hour of work to their Kenyan team, who are then provided with food without incurring any additional charge.

The conflicts discussed in this article are never communicated to the Human Resources department of the Chinese SOE in Lamu or to the Kenyan agencies involved in the planning and implementation of the port’s construction. Consequently, the impact is only felt within the construction area alone. The Kenyan government has made a USD 480 million commitment for Phase One of Lamu port, yet these instances of poor working conditions and job insecurity often go unnoticed.

This leads to the question whether the almost indiscernible instances of everyday resistance might have a larger impact if Kenyan workers were able to rely on mechanisms such as collective bargaining through unionisation, or on the support of Kenyan governmental agencies.

Elisa Gambino is a doctoral researcher on the AFRIGOS project. She is contributing research on Chinese engagement in East African infrastructure development and Africa’s role in the Belt and Road Initiative (BRI). Her research focuses on the cases of Lamu port in Kenya and Bagamoyo port in Tanzania.

The BRI and the Asian region: Impacts and responses
Challenging times for China’s economy: The need for change and effective leadership