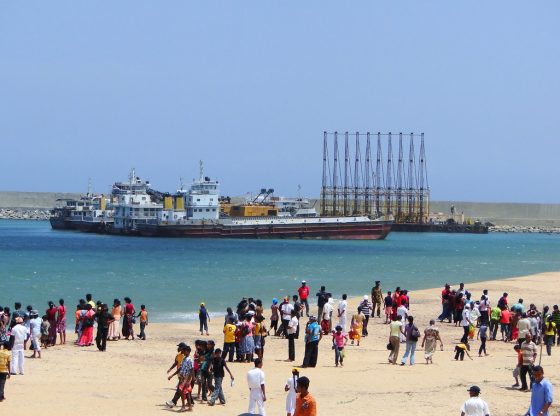 In 2015, the commercial failure of the Hambantota Port project and the inability of the Sri Lankan government to repay a debt of USD 1 billion forced the authorities to turn the port’s lease over to the Chinese for a period of 99 years. The government of Mahinda Rajapaksa (responsible for initiating the port project) had first approached long-time Indian lenders for funds, but this was rejected as feasibility studies deemed the project to be commercially inviable. True to the predictions of the experts, the port has seen little activity since its official opening in late 2010, and it only managed to draw in 34 ships in 2012.

So why did the Chinese choose to finance the Hambantota Port project? Some suspect that Beijing’s agreement to finance the failed business venture was really a means to control the militarily strategic water routes, so as to provide China with a geopolitical advantage vis-à-vis India. Others suggest that through a financial trap known as ‘debt diplomacy’, Beijing wishes to exert greater influence on foreign governments that become indebted to China. Whatever Beijing’s motivations may be, one thing is certain: China has an image problem, and this isn’t confined to Sri Lanka alone.

Take Southeast Asia. In 2018, a nationwide protest swept across Vietnam when Hanoi published its proposal to create three special economic zones (SEZ) for the development of industrial infrastructure that would allow investors to lease land for up to 99 years. Fearing that the likely beneficiaries of such a policy would be the Chinese, people took to the streets in protest – something quite unexpected in authoritarian Vietnam which took Hanoi completely by surprise. Ultimately, the government caved in to the demands of the protesters and scrapped the 99-year lease scheme altogether.

Sentiments towards China also appear to be deteriorating in Cambodia. Until recently, the coastal city of Sihanoukville had been a popular tourist and gambling hub for the Chinese. While the Chinese presence has undoubtedly stimulated the economy of this once scenic and tranquil locale, it has also made housing less affordable for locals, as Chinese real-estate investors price them out of the market.

Unsurprisingly, the Chinese have encountered an increasing backlash against what Cambodians deem to be the ‘transformation’ of Sihanoukville into a Chinese province. To make matters worse, Chinese-backed projects, which are largely related to infrastructure, are known for hiring Chinese workers at the expense of locals. This strengthens local perceptions that Chinese investments may be less about raising local living standards and more about increasing Beijing’s political and economic clout in the country.

Data suggest that increasing Chinese investment in the region may be rubbing the local populations up the wrong way. The dataset entitled ‘China’s Public Diplomacy in East Asia and the Pacific 1.0’, compiled by the AidData Research Lab (affiliated to the College of William & Mary, Williamsburg, VA), shows that China has generated a steady flow of infrastructure investment projects in Cambodia, Vietnam, Indonesia and Myanmar between 2001 and 2016. However, results from Asian Barometer surveys, administered by the Hu Fu Center for East Asia Democratic Studies, suggest that local perceptions of China are on the decline in several ASEAN countries that have seen high levels of Chinese investment in recent years.

According to Asian Barometer’s Survey Round 4 (2014–2016), the average score for public perceptions towards China is lowest in Vietnam, at only 2.6 on a range from 1.0 (least favourable opinion) to 6.0 (most favourable opinion) among the eight ASEAN countries surveyed. Cambodia’s opinion of China is better, standing at 4.5 in Round 3 (2010–2012), although the more recent polls from Round 4 indicate that this is now on the decline, falling to 4.1. (And this was before news broke about the apparent ‘Sinicisation’ of Sihanoukville.)

Interestingly, even though Myanmar has traditionally been an ally of Beijing and has seen substantial levels of infrastructure investment from China, average public opinion there in 2014–2016 was low, standing at 2.7; only slightly higher than the score for Vietnam.

Public opinion in Indonesia, which has long had friendly ties with Beijing and welcomed Chinese infrastructure investments, appears generally positive, although perceptions declined from 4.3 in 2010–2012 to 4.1 in 2014–2016. Nonetheless, this is a relatively marginal downward shift and smaller than that seen in Cambodia. Indeed, with heightened concerns stemming from the opaque and mismanaged Bandung-Jakarta high-speed rail link and recent maritime encroachments by China in the South China Sea, it is a wonder that sentiment towards China in Indonesia remains as high as it does.

All in all, it is difficult to conclude that Beijing’s motives are as malicious or calculated as they are portrayed in Western political and media outlets. However, the fact that the political regime in China has few democratic credentials to speak of will likely cause many people, especially in the West, to be suspicious of Beijing’s intentions.

That said, is it possible that the Belt and Road Initiative (BRI) could universally be seen as a force for good, not only in Asia, but right across the world? I believe yes, but only when Beijing stops funding vanity projects in neighbouring countries, whose only goal is to shore up the egos of powerful leaders in the host nations, and when the East Asian giant becomes transparent in its dealings with the authorities and citizens of those nations.

Dr Chee Meng Tan is an Assistant Professor of Business Economics at the Nottingham University Business School in Malaysia. He is the co-author of The Belt and Road Initiative: Environmental Impacts in Southeast Asia (ISEAS Publishing, 2019).

The COVID-19 epidemic and China’s wildlife business interest
What does the coronavirus reveal about the presence of foreigners in Wuhan and Hubei?