How Asia perceives China in the context of BRI: Evidence from an Asian poll 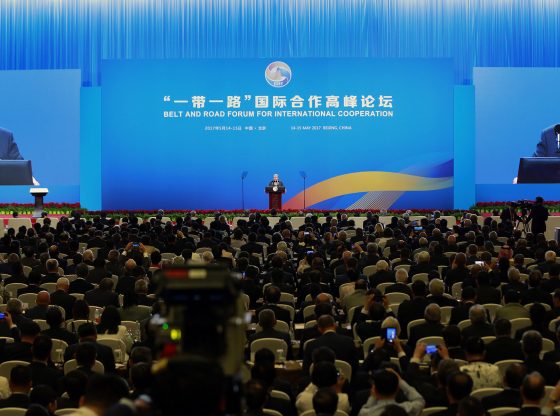 Following the end of the Cold War, the world has witnessed China’s rise as an emerging superpower, both in regard to its spectacular economic growth and also in terms of its increasing political-economic impact beyond its borders. However, many Asian countries have mixed feelings vis-à-vis China: they are eager to benefit from the favourable spillover effect but concerned about economic over-dependence; willing to promote mutual cooperation yet cautious because of disputes over sovereignty.

Thanks to the launch of the Belt and Road Initiative (BRI) in 2013 at the beginning of the era of President Xi Jinping, China is now seen as a provider of international and regional public goods and this is reshaping Asian people’s perceptions and attitudes regarding the People’s Republic. In other words, the view of China’s rise in the region has changed from being simply an economic miracle to that of a generous powerhouse, and greater political trust has emerged despite the ongoing disputes over sovereignty. Moreover, if China can succeed in containing the novel corona-virus epidemic in 2020, this may increase political trust.

This is not to say that the conditions for provoking some form of security dilemma have disappeared or that China and its neighbours will form a close-knit community like the European Union. But it does suggest the emergence of a benign state of affairs because of substantial shared interests in the context of BRI, which will significantly improve relations between China and surrounding countries.

Since most Asian nations are small or medium-sized countries compared to China, they have to consider delicate political and economic trade-offs between China and the United States. This means they need to calculate the potential gains and losses between ‘bandwagoning’ and ‘balancing’ when faced with China’s rise. Even American allies in the developed world such as Japan and Australia need to consider the huge cost that could result from a potential conflict with China. It is clear that such complex and differentiated official strategies will influence public opinion about China in these countries.

China’s neighbours are unlikely to choose to resolve their disputes over sovereignty with China through conflict because of their asymmetric size and weakness, quite apart from their greater interest in maintaining regional stability and extracting more trade and investment from China. Furthermore, although the United States has been trying to contain China’s political and military influence in the Asia-Pacific region, the self-interested policies adopted by the Trump administration have caused great uncertainty about relations between the US and Asia.

Consequently, the majority of Asian countries have not turned completely to the US, even while seeking America’s help in regard to their own security. These nations have managed to maintain a neutral posture between China and the US by implementing a ‘hedging policy’.

This hedging policy refers to a two-handed strategy that pursues the best outcome while preparing for the worst situation; it is dressed in the distinctive colours of pragmatism and self-defence. In recent years, Indonesia, Malaysia, Singapore, the Philippines and Vietnam have actively implemented to different degrees a hedging foreign policy vis-à-vis China. This has had such an impact on public opinion in these countries that a pragmatist attitude towards China now dominates.

BRI: A new programme for the supply of international public goods

At the beginning of 2017, political scientist Joseph S. Nye, Jr. proposed the ‘Kindleberger trap’ hypothesis, according to which China’s current behaviour model following its rise might not be ‘showing strength’ but ‘showing weakness’ instead, in that it is unwilling to assume international leadership. With the United States either unable or unwilling to continue to be responsible for the overall supply of international public goods, this places the world in a leaderless and hence dangerous situation.

In May 2017, at the first Summit of International Cooperation for One Belt One Road (OBOR; the former name of the programme that became the BRI), Xi Jinping announced that China would increase its assistance to developing countries along the different BRI routes. The total amount of assistance over the next three years would be no less than CNY 60 billion (USD 8.53 billion), and China would provide CNY 2 billion (USD 284.46 million) of emergency food aid for these countries and for the South-South Cooperation Assistance Fund.

By the end of 2018, China had established 45 overseas industrial parks along the different BRI routes – 37 of them in Asian countries – representing a total investment of more than USD 25 billion.

In response to China’s call and practical efforts, more and more countries from Asia, Africa and Europe are looking to develop their interests through the BRI, helping to expand the global impact of the initiative as a result. China has likewise managed to place itself in an undisputed leading role in terms of economic recovery and sustainable growth in Asia and across the developing world. Hence the BRI represents a new programme for the supply of international public goods, as advocated by President Xi in the 2017 summit.

It is important to know how people in Asia view the rise of China and its political and economic influence in the region, especially since the launch of the BRI in 2013. The Asian Barometer Survey (ABS), a fully accountable, cross-national sampling programme, provides some useful data about this. The latest survey of the ABS is the fourth wave investigation conducted between 2014 and 2016, presenting a relatively precise poll from most of China’s neighbouring countries.

Since most people in the region are used to judging geopolitical stability from the perspective of the established US-dominated political order, using the ABS data it is possible to analyse how people in Asia now view China’s role in regard to regional stability and order.

Figure 1 shows that respondents in 11 Asian countries have a fairly divided opinion about the role China is playing in the region: 51.2% of respondents believe it is playing a positive role while 48.8% consider it to be playing a negative role. Overall, the two sides are very nearly matched. However, it is unsurprising that 63% of respondents in the four countries which currently have major sovereignty disputes with China (Japan, Malaysia, the Philippines and Vietnam) gave a more negative evaluation of China’s role, while 60% of respondents from the seven countries with no major disputes with China offered a much more positive evaluation. 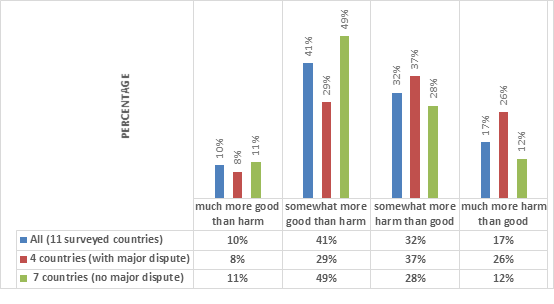 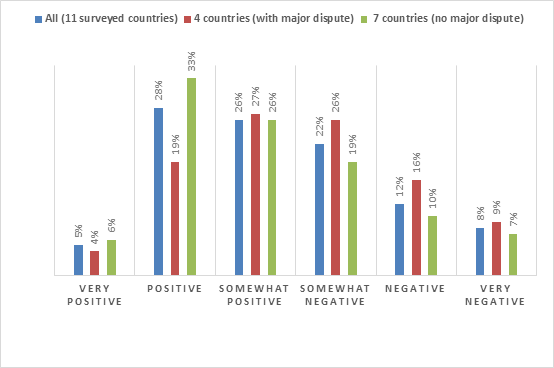 The next question is to consider how Asian people view the present regional hegemony and the future geopolitical order. As shown in Figure 3, China and the US scored 54% and 32%, respectively, in response to the question: ‘Among China, India, Japan and the US, which country has the most influence in Asia?’ This changed to 65% and 32% when respondents were asked which country would have most influence in the region in ten years’ time.

Figure 3. Asian people’s views of regional influence now and in the future 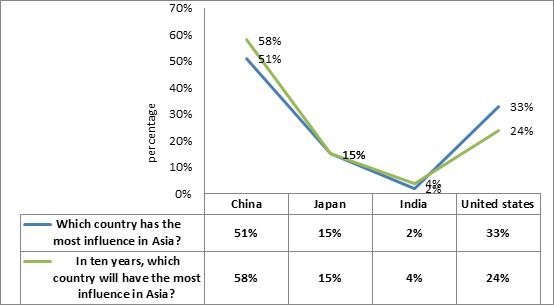 Other polling data support this analysis. According to an international poll released by the Pew Research Centre in October 2018, when it comes to opinions about favourability, the two superpowers score almost equally across the global population, with China scoring 47% and the United States 49%.

Among the 38 major countries surveyed, 24 of these still consider the US to be the current world leader, while 12 selected China as the new leader instead. Two years ago, the ratio was 32 to 6 (Devlin, 2018). This latest data suggests that although the US has not completely lost its hegemonic status, the view of China as an emerging superpower is gaining ground.

Faced with China’s rise in the era of the BRI, while many governments and elites in Asia still present a guarded, if not hostile attitude, the wider population in these countries actually have a more pragmatic attitude. To a great degree, this is because the BRI and many of the important international development projects promoted by China embody the features of international public goods.

Since the Beijing Olympics in 2008, China has been presenting a new national image to the world: rather than being a ‘free-rider’ of international public goods, China intends to be an important contributor instead.

Nevertheless, China is not yet strong enough to act as a true global leader and replace US hegemony. At present, China is only able to appeal and lead in a few emerging fields, such as infrastructure construction, e-commerce and poverty reduction. In addition, China still needs to negotiate with other advanced countries on a regular basis in order to maintain its embryonic leadership role in a number of specific fields and businesses. Besides, the way of Chinese government’s fight against the recent novel corona-virus epidemic is seen as an important indicator to its increasingly modernising governance system.

The establishment of international leadership requires a country to exhibit not just ‘hard power’ in terms of national economic and military strength, but also acceptable ‘soft power’ in terms of shared values and benign governance. To date, China’s developmental experience is still short on the latter.

Nonetheless, we are currently witnessing the mass modernisation of China’s national governance, and as more benign governance and promotion of the rule of law improve China’s national image and international reputation, we should have high expectations of the country in the future.

Zhenqing Zheng is an Associate Professor and Director of the International Master’s Programme in Public Administration at Tsinghua University, China. He is part of the fourth wave of the Asian Barometer Survey, doing research on comparative political economy and public opinion across Asia.

Exploring China’s strategic intentions in Central, West and South Asia
China’s involvement in the Levant: It’s the economy after all