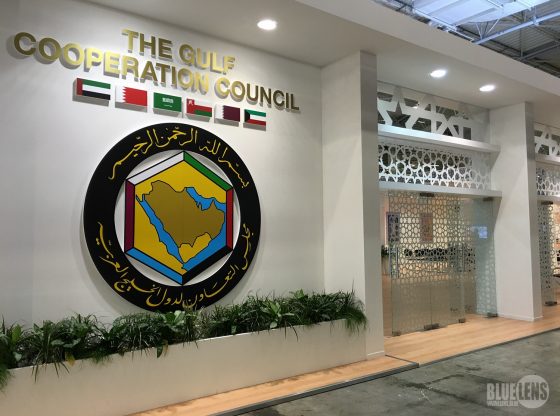 Two decades into the twenty-first century, we can see how the essence of China’s partnership diplomacy has quietly evolved. The target countries have changed from the great powers and China’s neighbours to remote and small or medium-sized countries in the Middle East, Africa and Latin America. At the same time, there has been a shift from bilateral partnerships to multilateral ones, from partnerships with sovereign countries to engagement with regional and international organisations, and from static relationships to something more ad hoc.

China’s new partnership diplomacy originates from the view that alliance diplomacy no longer accords with the times. In the Middle East, both military alliance networks and sectarian networks are, by their very nature, antagonistic groups working on the principle of ‘you are either with us or against us’.

As a socialist power, China would like to seek ‘glorious isolation’. In the meantime, Beijing has chosen to transcend its political and ideological differences with the target countries, establishing a network of partnerships on the basis of ‘marriage without licence’ and ‘seeking common ground while reserving differences’, which is also consistent with China’s diplomatic philosophy of non-alignment.

China’s Middle Eastern partners can be categorised into four different layers according to their importance. These are: the pivot states, the node states, the key states and the stronghold states.

‘Pivot states’ refers to the regional powers with comprehensive strength who function as pivots or hubs in China’s global partnership network. The five pivot states in the Middle East are Algeria, Egypt, Saudi Arabia, Iran and the UAE. These countries are politically, economically and militarily strong, and crucial to China’s interests in the Maghreb, the Red Sea area and the Persian Gulf, respectively.

‘Node states’ refers to those partners that enjoy a particular special status, serving as bridges to facilitate cooperation between China and other great powers. They serve China’s overall interests in the Middle East and beyond. Turkey and Israel are both such node states. Turkey provides the gateway for Chinese products to reach the European market, while Israel is the ‘go-between’ for better relations between China and the US.

The ‘key states’ are those medium-sized Middle Eastern powers that have relative economic mass and development potential and which can exert influence on their neighbouring countries. In terms of China’s partners in the Middle East, Sudan, Iraq and Morocco may fall into such a category, playing a leading role in the Red Sea area, the Persian Gulf and the Maghreb, respectively, albeit with a currently volatile domestic political situation.

Finally, the ‘stronghold states’ are those partners which are relatively small in terms of their size, population and economic volume but which nonetheless exhibit a high degree of friendliness towards China and have a strong desire for bilateral economic and trade cooperation. Hence these countries function as strongholds for the protection of particular Chinese interests in the Middle East. These partners are Qatar, Oman, Djibouti, Jordan and Kuwait. 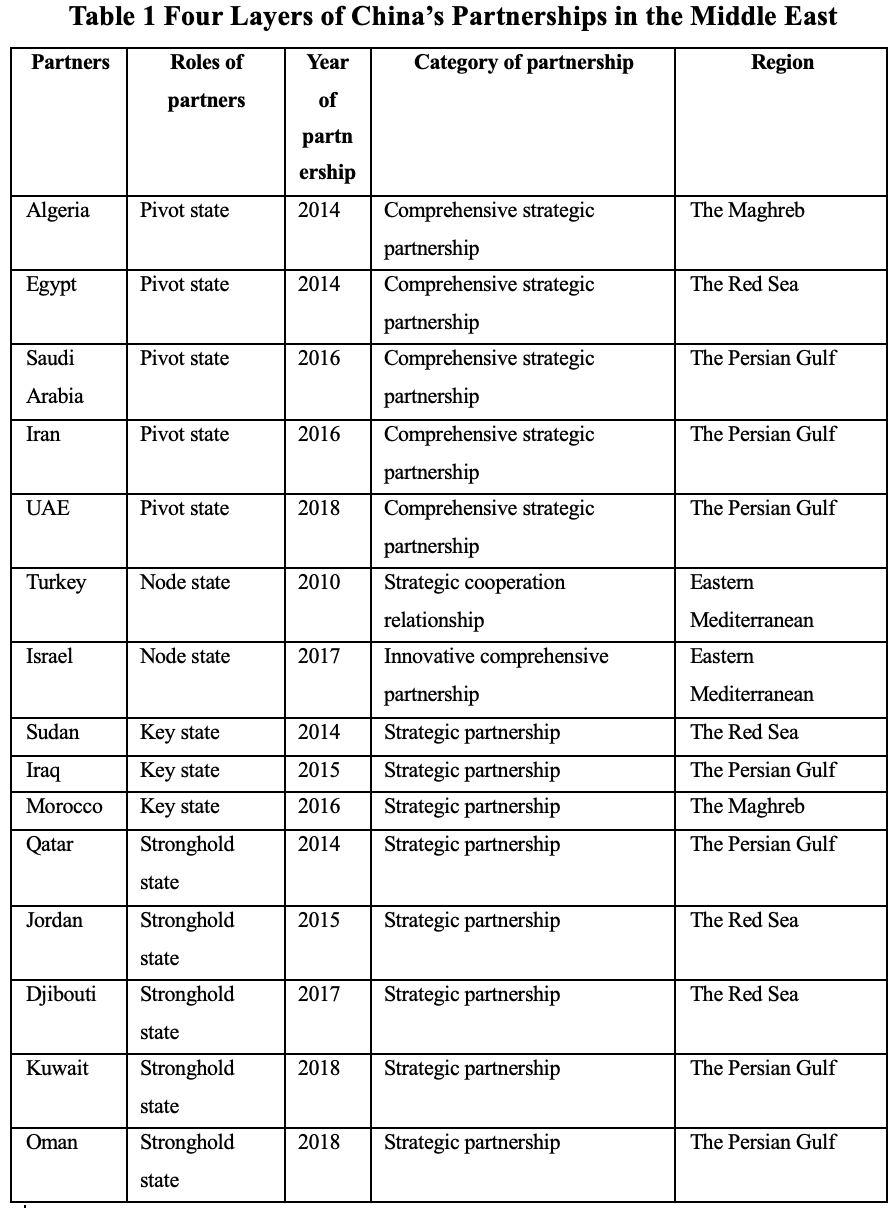 China seeks a position of geopolitical non-alignment, but its partnership diplomacy in the Middle East has objectively ‘diluted’ the influence of other great powers, facilitating the formation of a multi-polar pattern and constituting a kind of ‘soft balancing’ against hegemony and unilateralism. Almost all the Middle Eastern allies of the US, Europe and Russia are simultaneously strategic partners of China.

The partnership with China prevents these countries from developing an asymmetric dependence on other great powers. For example, while the US has been urging countries like Turkey, Saudi Arabia, Egypt, Sudan, Jordan, Kuwait and the UAE to speed up their political and economic ‘democratisation’, the establishment of a strategic partnership with China has alleviated such political pressure. The partnerships between China and medium-sized or smaller powers in the Middle East such as Qatar, Oman, Kuwait and Djibouti are conducive to increasing their security autonomy.

Looking to the future, China’s partnership diplomacy in the Middle East faces a number of hurdles. First, the appeal of China’s economic growth makes it possible for Middle Eastern countries to benefit from their partnerships with Beijing and in turn expand mutual trust and consolidate the basis of these partnerships. While China keeps its partnership diplomacy at the level of low politics, it may nevertheless face significant obstacles should conflict arise at the level of high politics.

Also, many of China’s Middle Eastern partners (which are still caught up in security dilemmas) hope that China will play a greater role in terms of ensuring regional security. However, China’s priority for cooperation with the Middle East remains in the economic and political domains so as to avoid heavy involvement in regional disputes. China’s partners would prefer Beijing to pool its public security goods rather than just public economic goods, as represented by the Belt and Road Initiative (BRI).

China is the largest trading partner, the largest oil purchaser and the largest investor in Iran, and Tehran is one of the most important political, economic and trading partners for Beijing in the Middle East. Iran also serves as a linchpin in the BRI, with Chinese infrastructure investment totalling USD 8.5 billion as of early 2018. US maximum pressure on Iran has already affected China-Iran economic and political cooperation. In addition, China’s participation in seaport construction with partners such as Saudi Arabia, Egypt, Israel, Oman and Djibouti have also triggered doubts and led to criticism from the US.

A third issue concerns the need for further research around how China can exploit the advantages of its strategic partners through its participation in regional political affairs. All fifteen of China’s strategic partners in the Middle East offer enormous economic volume and significant regional influence. Alongside their relative political stability, the economic dependence of these countries on China and their high degree of political friendliness vis-à-vis Beijing are also relatively high.

However, there are another ten countries in the region which have yet to establish partnerships with China, including Yemen, Syria, Lebanon, Palestine, Somalia, Libya and other countries that are flashpoints of conflict. Being increasingly marginalised in the global economic system, together with the spillover of their domestic problems, these countries have fallen victim to foreign interventions. Enhancing China’s partnerships with its pivot, node, key and stronghold states should consolidate their cooperation in these conflict areas, which could play a positive role for peace in the Middle East and regional development.

Finally, China’s partnership diplomacy in the Middle East needs to be more creative in terms of formulating rules and regulations. So far, China has offered numerous material public goods to its partners, but at the same time it has met with much criticism and been accused of creating ‘debt traps’ and ‘neo-colonialism’.

Until now, China has been weighing up the gains and losses in its relations with regional powers in the Middle East and conducting multi-track partnership diplomacy in the region. However, so far this has failed to bridge the substantial differences between Iran and Saudi Arabia, between Israel and Palestine, between the Sunnis and the Shias, between the pro-Muslim Brotherhood alliance (Turkey and Qatar) and the anti-Muslim Brotherhood alliance (Saudi-Arabia, the UAE and Egypt), or between the pro-Western camp (the GCC plus Egypt and Israel) and the ‘resistance alliance’ (the Iran-led Shia coalition).

Dr Degang Sun is Professor of Political Science at the Institute of International Studies, Fudan University, Shanghai, China. He is Editor-in-Chief of the Asian Journal of Middle Eastern and Islamic Studies (published by Routledge, Taylor & Francis), and was Professor and Deputy Director of the Middle East Studies Institute of Shanghai International Studies University, China. He was a visiting scholar at the Centre for Middle Eastern Studies, Harvard University (September 2018 to September 2019), and a Senior Associate Member at St. Antony’s College, Oxford University of Oxford. He has been an Academic Visitor to the Oxford Centre for Islamic Studies (2012–2013) as well as Denver University (2007-2008) and Hong Kong University (2004–2005). His research interests are Middle Eastern politics and international relations, great powers’ strategies in the Middle East, and China’s Middle East diplomacy.