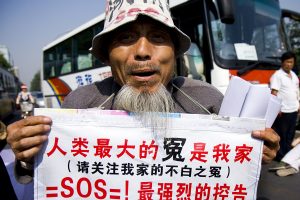 Beijing, May 20, 2009: Peng Qingguo, 56, one of Beijing’s veteran protestors, takes part in a protest near China’s National Office of Petitions and Letters in southern Beijing. Peng says he and his wife were severely beaten by thugs in their home province of Hunan after resisting the requisitioning of their farmland by Hunan Normal University in early 2004. His sign reads: “Mankind’s greatest victim of injustice is my family.”